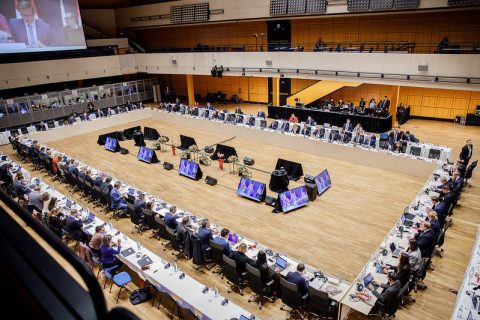 Published on 25-10-2022 at 06:00
Image: Flickr. Official account of the Czech presidency of the Council of the European Union.

The informal meeting of the Eu transport ministers on Friday, 21 October, could produce some palpable energy measures for the railway sector. The energy, and specifically, electricity crisis plaguing rail freight and passenger transport currently monopolised the ministerial meeting’s focus, with some proposed measures seeing the light. However, do they meet the sector’s needs?

Railway unions and associations have been ringing a red alarm for a few weeks now regarding the viability of rail transport in the context of the skyrocketing electricity bills that operators need to pay, also leading to price increases in final services and discouraging customers from putting cargo on rail tracks.

Since early September, UIRR has stressed that without regulating electricity prices, the combined transport sector cannot compete against long-distance trucking. Additionally, ERFA and CER filed formal inquiries to the EU Commission, asking it to ensure the avoidance of a reverse modal shift due to the electricity prices.

On the latest developments, CER sent an official letter to the president of the EU Commission, Ursula von der Leyen, demanding immediate action and proposing concrete measures to alleviate pressure from the railway sector. Last week, ERFA, UIRR and UIP urged the EU to activate its emergency intervention mechanism for railway transport, a move that the industry has been counting on since the EU announced its plans, but still with no actual results.

Compensations the only drastic measure

As for the informal EU transport ministerial meeting, it did not seem to grasp the railway sector’s struggles wholly. Despite the ministers pledging that electrification processes should not stagnate because of the ongoing crisis and that electricity-powered rail should remain at the core of operations, they did not provide many concrete measures to ensure the industry’s viability.

The only tangible action proposed was that of compensation and other support for rail operators without getting into much more detail. Of course, compensating rail operators for their increased energy costs could help them balance their business and provide more incentives for customers to remain on the rail by lowering service costs.

Additionally, it is the only measure in line with CER’s proposals to include rail in the beneficiaries from the surplus revenues deriving from the EU’s emergency energy market intervention plan, reducing, waiving or deferring the prices for track access charges and preparing sufficient state aid schemes for rail to cover financial losses of up to 2 billion euros.

The remaining proposals focus mainly on energy-saving actions like using mandatory measurement systems of energy consumption, energy reduction programmes, clean energy projects investments, effective management of electric heating of switches and capacity management. Will they be enough to counteract the galloping electricity prices? First, the ministers should ensure that the informal proposals will transform into concrete actions ready for implementation. When this time comes, consulting the sector could be the best approach to resolving issues, and the industry has been quite vocal concerning its needs.