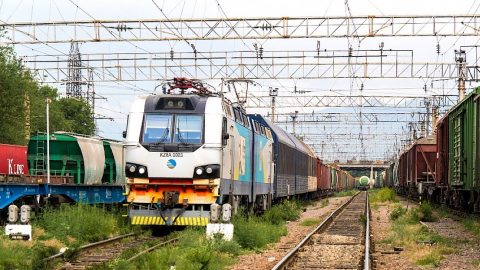 Rail liberalisation experiment Kazakhstan failed, what is next?

A pilot project to liberalise the rail freight market in Kazakhstan has failed. A legal frame defining how private and public carriers should interact was not realised on time before the deadline of the project was reached. As a result, there is now a ‘legal loop’, explains the Kazakh Association of Rail Freight Carriers (ARFC).

Today, the rail freight market in Kazakhstan is dominated by KTZ-Cargo, a subsidiary of the national railway company Kazakhstan Temir Zholly (KTZ). KTZ-Cargo holds a 100 per cent shareof international transport (import, export and transit) and more than 90 per cent of cargo turnover domestically.

In order to develop market competition, a pilot project was launched in November 2018. In addition to KTZ, cargo transportation has been carried out by 2 more carriers that received access to the services of the main railway. This pilot project officially ended on 10 June, with no immediate legal framework to continue the division of labour.
“Since December of last year, neither the national railway company nor the Ministry of Industry and Infrastructure Development have approved amendments and additions to the temporary regulations previously agreed by the parties”, said the ARFC.

These regulations should determine the algorithm of technological interaction and joint work of carriers with the infrastructure operator, it continued. The temporary regulations were supposed to last until 2023, and during this time a package of amendments were to be prepared that would result in a new set of measures.

Although private carriers have come up with a new set of regulations, these have until this point not been signed, either by KTZ or by the Ministry of Industry and Infrastructure Development, explained Evgeny Bolgert, the head of the association. As a result, a “legal hole” has emerged in the relationship between private business and a monopolist.

The need for a more privatised railway market in Kazakhstan is high. As a result of increasing traffic, there is a shortage of locomotives which the national railway company by itself cannot deal with. Private carriers could help solve this problem, the ARFC argues. Throughout the pilot project, the private carriers contributed 69 mainline electric and 16 diesel locomotives.

In addition, there were other positive effects of the pilot project. On certain routes, the weight of the train was increased by 9 per cent (by 585 tons), which made it possible to reduce the number of trains by 3.9 trains. The turnover of empty cars was improved by changing the carrier’s operation technology, and the turnover of block trains was improved by an average of 14-15 per cent. In addition, it was possible to increase the profitability of coal transportation.

Contracts longer than a year

“The necessary conditions must be created for the expansion and renewal of the locomotive fleet. We need at least a medium-term planning horizon. The national infrastructure operator provides access to private carriers to the network only for one year, despite the fact that at the legislative level it is possible to conclude long-term access contracts for a period of 5 years”, said the interest group.

“The cost of one mainline locomotive varies today on average from 4-6 million US dollars. Short-term annual contracts for access to the mainline railway network restrict private cargo carriers in attracting debt financing. This worsens the investment climate in the sector and hinders the arrival of investments in the industry, which means that the development of the cargo transportation market in the country as a whole”, Bolgert believes.

The association suggests, at least, extending the temporary regulations until the end of this year, resuming the work of the relevant commissions to complete the three-year work.
“This is especially important given the fact that about 50 licenses for this type of activity have already been issued in the country, and applications for access to the sections of the MWS from private carriers for 2023 will be accepted”, concludes Bolgert.

1 comment op “Rail liberalisation experiment Kazakhstan failed, what is next?”

Regardless, if by a national monopol, or not, quality, interest of customers, clients shall be top priority! (Quality of service rendered, On Time, and safe eta, now has to be provided for by railways!)
Costly infrastructure, timely before WWII now decisively has to be upgraded. As the global devices, by air and by sea, etc. utilisation has to be high. Low costs have to be provided for, the requested for reduced track charges, etc., etc.
32,5 ton axial load, etc., safely shall be provided for!