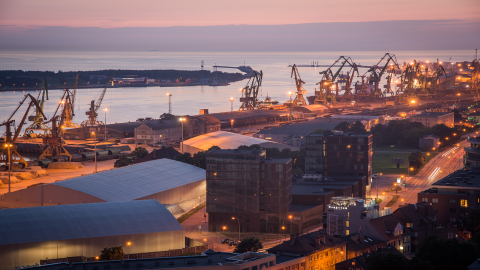 Lithuania wants port of Klaipeda included in the TEN-T network

Lithuania aims to grasp the opportunity of the TEN-T revision by the EU Commission and include the port of Klaipeda in the development plans. The largest Lithuanian seaport needs to have a European high-speed rail connection, stressed Marius Skuodis, the Lithuanian transport Minister who also submitted an official proposal for this matter.

“To connect all the ports of the EU’s eastern Baltic coast by rail and enable the residents and cargo to reach the rest of Europe faster, it is imperative to include a European gauge railway route to Klaipėda in the development plans of the Trans-European Transport Network TEN-T. In today’s geopolitical context, the integration of the Baltic States and Ukraine into the EU transport system is one of the priority goals,” said Skuodis to the Transport, Telecommunications and Energy (TTE) Council of the European Union.

A high-speed line with European gauge to the port of Klaipeda would be a game changer for transport in Lithuania, the Baltics and even Ukraine, underlined Skuodis. Central Europe would also benefit from it, he emphasised. “A fast European gauge railway track to Klaipėda would fundamentally change the Lithuanian transport system: it would create a promising alternative to road transport and help diversify the activities of Klaipėda Seaport faster”.

“It would also improve transport and logistics connections in Central and Eastern Europe by creating new freight corridors with Ukraine”, highlighted Skuodis, who sees the port of Klaipeda as one of Ukraine’s life arteries when it comes to grain exports. However, the current infrastructure cannot handle Ukraine’s export capacity demand. Despite the development of Rail Baltica by Lithuania, Latvia and Estonia, the project is still not there, and the need for immediate and drastic solutions to develop transport in the region and assist Ukraine is pressing. As a result, the inclusion of Klaipeda in the TEN-T network is seen as a decisive first step to alleviating some of the current transport bottlenecks.

Are you interested in learning more about Lithuania, the port of Klaipeda and their business potential? Do you want to get informed about the new routes linking the country with Western Europe? Next week on 14-15 June, we organise the RailFreight On Tour-The Lithuanian Edition in Vilnius, where we will discuss the possibility of a profitable rail business in Lithuania and the broader Baltic region.

During the event, interested parties will have the chance to hear more about developments such as the Hamburg-Klaipeda cooperation, get in touch with local players and explore possibilities for their own businesses. Take a look at the event page here and register here.