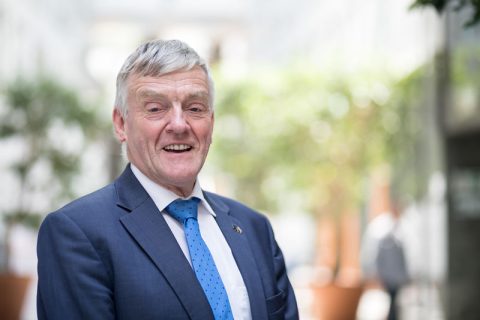 “There is a lot of consultation, a lot of unanimity, but not enough is being done on the ground,” says rail ambassador Wim van de Camp about the Dutch rail sector in his final report on the European Year of Rail. This thematic year officially ended in March 2022, and the ambassador has now analysed the results.

Currently, too much time is lost in rail freight transport on minor cross-border problems such as mandatory rear lights and train weight. Moreover, governments still think strongly about rail transport at a national level and the technical systems in the various countries are very different. This can be explained as one of the reasons for the ‘industry slowness’, according to van de Camp. He mentions the slow connection of the Betuweroute to the German railway network as an example.

Other modalities are more adaptable, he says. Van de Camp identifies a lack of market opening, competition and innovation in the railways as an important obstacle to further steps and also points to the presence of ‘slow state-owned companies’.

According to the ambassador, the rail sector is still an expensive sector compared to other modalities. The ambassador advocates lowering the rail user fee in the context of climate policy. He also stated that more investments should be made in TEN-T corridors for 740-meter trains and the diversion of freight transport outside the city centres.

In the end, there is also a mental shift needed among shippers. They need to start asking themselves what sustainability is worth to them, he concludes.

The report can be downloaded here.

This article is a translation of a publication on Nieuwsblad Transport, our sister webiste.

Expensive, yes, regrettably due to own shortcomings. User fee soundly and sustainably can be reduced, but just when costs for repairings (“attended maintenance”), etc. sufficiently are reduced, etc. All over costs substantially have to be attended. Compare how global Industry, by air and by sea, add load capacity for reducing costs, etc. Short, heavy trains are better than long…
However “Bottleneck” now is Industry’s low quality mark. Quality pays! Quality Programs have to be upgraded, etc.!

As well, within nations however, problems remain, by Industry – and media… – covered up by “new speech”…
Authorities allow 22,5 ton axial load, but not techniques, etc. Predictive, optimised “maintenance” is good,, but safely calculable track construction, with safety factors…, is the requested, the sustainable. (Added traffic, loads and speed now has revealed the weak links, simply now urgently to be attended, as clients have shifted to “On Demand” and On Time deliveries is high quality.