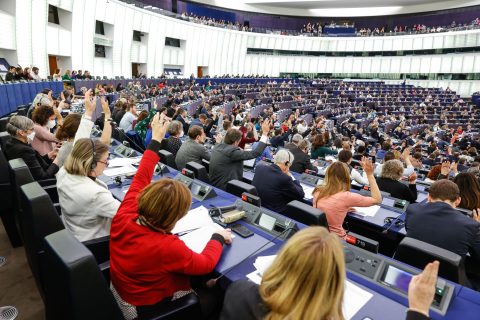 The EU Parliament’s plenary session on 5 May adopted a resolution for more sanctions on Russia and extra support for the transport sector. Rail was not explicitly mentioned, despite the parliament acknowledging that “the conflict is having a dramatic impact on rail freight flows between Asia and Europe, creating uncertainty for businesses operating trains”. However, the MEPs mentioned that “EU transport operators with links to the Russian market should be supported, as they reorient their operations away from Russia”.

Rail freight companies are included in the umbrella term “transport operators with links to the Russian market”. Rail operators could arguably be among the transport companies facing most of the war’s and sanctions’ backlash. The specific resolution could be a message that direct support for transport companies is underway by the EU. However, it is uncertain since a parliamentary resolution is not binding, rather than a suggestion for measures.

Regrets for no direct ban on Russian Railways

The EU Parliament assembled in Strassburg provided an interesting plenary session also discussing rail freight issues. An important takeaway is the parliament’s regret that “there is no direct ban on rail transport operations with Russian Railways for the time being”. The Parliament expressed its discomfort that rail companies can still do business with the Russian Railways; however, it underlined that this is effective for the “time being”, not excluding the possibility of proposing a complete ban on working with the Russian railway company.

Rail freight between Europe and Ukraine was also on the agenda. MEPs stressed that “cargo on freight trains is running up against physical barriers, with thousands of wagons stuck in queues at the border of Ukraine and EU countries”. They called on the Commission to support Ukraine in its efforts to diverge the traffic flows, establish new connections and set fast-track trade routes by strengthening rail connections between Ukraine and the EU.

Finally, the Parliament agreed that the war in Ukraine has highlighted the “necessity for the EU railway system to accommodate higher volumes of freight. Therefore, it called on the Member States to accelerate the standardisation, harmonisation and interoperability of the railway systems across all Member States and on the Commission to continue monitoring the implementation and the remaining shortcomings”.

According to the Parliament, “the EU should help Member States develop dual-use infrastructure and transport interconnections within the EU, but also with the Western Balkans, Moldova, Georgia and Ukraine”. Finally, MEPs also advocated “for the trans-European transport network to be extended to Ukraine and Moldova”.

Regardless why, any support, “extra”…, etc., for sake of clients and for Industry, now, however, urgently has to to be, for adding quality.
(With ware owners shift to “On Demand”, simply now On Time supplies is high quality. Just a minority can afford the luxury, of not caring about eta.) Quality pays and now more, than ever before!
Hgh capacity, by high utilisation (minimal disturbing etc.) and with low costs, by high load, then as well trac charges, sustainably can be reduced, etc.