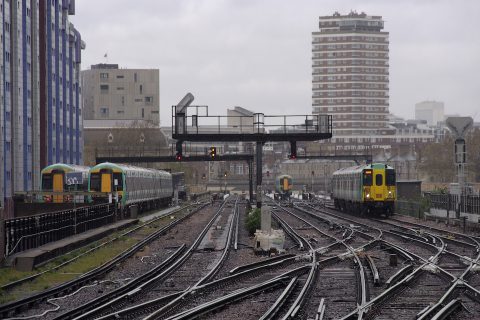 As London’s tube network ground to a halt on Tuesday, it was more than just commuters that felt the pain. The relationship between the major trades unions and the railway industry has always been robust, but the two 24-hour strikes called this week represented a new low-point.

The belief that shaking off the shackles of state-ownership would bring railway management and workforce closer lasted about as long as it took for the ink to dry on the first franchise contracts back in the 1990s. Passenger train operating companies have been at loggerheads with the unions almost since day one. The big question is how the rail freight sector has been relatively unscathed.

The four and half decades of British Railways, latterly British Rail, saw a worsening industrial relations situation. As the sector and the network faced a vicious circle of declining traffic and a declining network, the unions inevitably fought a rearguard action in the face of the potential loss of more than two hundred thousand jobs. The irony of the sector’s present state – expanding beyond all expectations – has not been lost on trades union leaders.

The modernisation programme, which began in the mid-1950s, and saw the ditching of steam traction throughout the 1960s, inevitably reduced the necessary labour force. The wholesale line closures and destaffing of the passenger railway exacerbated the situation. Under the single market of British Railways and the toxic, confrontational industrial environment of the 1970s, any dispute affected the entire rail sector and brought everything to a standstill.

The gap between management and unions was never more apparent than this week. Speaking to the media during Tuesday’s strike on the London Underground, mayor of the city and the ultimate boss of the capital’s network, Sadiq Khan, told striking workers to “wake up and smell the coffee” and that industrial action would not make securing a deal with the government any easier.

Back to the future

The rail freight sector has escaped the worst of the disputes that have plagued the passenger side of the business. It’s not been entirely trouble-free – just as European cousins at DB Cargo, Britain’s less confrontational experience may be down to the more intimate relations between management and workforce. That may not be a notion that holds much credence with the likes of Mick Lynch, the general secretary of the RMT union (Rail Maritime and Transport).

In a bitter riposte to the Mayor of London, Lynch said that despite the government funding deal secured just this week to save the network from bankruptcy, there was little recognition of the efforts of the staff to help maintain the fabric of the nation these past two years. “If Sadiq Khan spent as much time putting pressure on ministers for a long-term TfL funding deal, instead of accepting their cuts agenda and attacking our members, there would be no need for a strike”, he said.

It’s unlikely either protagonist in this London dispute will be going away any time soon. If the fragmented nature of the industry has, unwittingly, helped avert a national strike, let’s not forget the purpose of the soon to be established Great British Railways – to unify the industry under a single working practice. Let’s hope it isn’t the 1970s all over again.