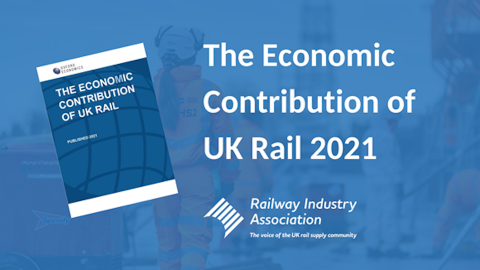 A new report published by independent researchers Oxford Economics pictures the UK railway industry as a booming sector before the pandemic struck last year. Freight is highlighted as a major force behind growth in the industry and in the economy at large.

The report, commissioned by the Railway Industry Association (RIA), shows UK rail as a major economic sector, driving growth, investment and jobs right across the UK. With the Government now looking for sectors which can help the country bounce back better, it further highlights how the sector can lead the economic recovery post-Covid.

Oxford Economics found that in 2019, the latest point where economic data is available, the rail industry supported 43 billion pounds (48 billion euros of gross value added (GVA), up by more than twenty-five percent in just three years. Jobs supported grew in the same period from 600,000 to over 700,000. Tax raised and return on investment grew by similar levels.

The report also looks at future scenarios for rail investment, based on National Infrastructure Commission (NIC) research. According to Oxford Economics and NIC scenarios, if rail investment is increased by fifty per cent, the sector would contribute to the economy an additional 5.6 billion pounds (6.2 billion euros) per year between 2025 and 2029, with an extra 104,000 individuals employed in the industry as a result.

“This new research by Oxford Economics reveals that, pre pandemic, the railway industry was growing, and supporting even more jobs and GVA than just a few years earlier”, said Darren Caplan, Chief Executive of the Railway Industry Association (RIA). “This shows that rail is not just an important sector in its own right, but is also crucial for UK plc more widely, its economy and connectivity.“As the Government seeks to build back better – with a growing economy, which levels-up, is green, and which helps promote Global Britain – it should look no further than the UK railway industry.”

This report by Oxford Economics shows a bourgeoning rail sector before the pandemic and how rail can provide more economic growth in the future, says the RIA. “The report shows that the sector had grown significantly from 2016 to 2019 and that, under the National Infrastructure Commission’s scenarios, the industry could produce even more economic value through further rail investment”, observes Doug Godden, Lead Economist at Oxford Economics.

The UK government and their devolved counterparts in Wales and Scotland have been vocal in their support of the sector. Scotland’s government has put its support for rail freight in writing already, even though there is still criticism over the speed of development and progress towards a more rail-based supply chain.

In London, Huw Merriman MP, Chair of the Transport Select Committee, welcomed the report. “It’s incredibly timely because effectively we need to do this all over again, when it comes to the investment we’ve seen from rail over the last 20 years or so. Now more than ever, we need that same zeal and enthusiasm and dynamism which the industry has brought to deliver that success, so we can now pick back up after the pandemic.”

The industry has already scrutinised the report and given it a seal of approval. James Quinnell, Chief Commercial Officer at Colas Rail, said the research confirms and quantifies with hard data the central role the rail network plays in the country’s progress. “A thriving railway which puts passengers and freight users at its heart is not only a great business case for investment but is critical to the whole economy and wider society”, he said.

Colas, the operator heavily involved in rail infrastructure work, would be at the sharp end of increased investment in the network. Already, they and other operators have seen network expansion – under such initiatives as “Reversing Beeching” – a modest attempt to put right some of the wholesale closures brought about in the 1960s, and commonly known under the name of the consultant employed by the government of the day: Richard Beeching and his infamous axe.

If the initiative of the report were even half as sharp as that liberally wielded instrument, then the rail industry would be set for a period of further growth, and the economy would benefit alongside with similar vigour.