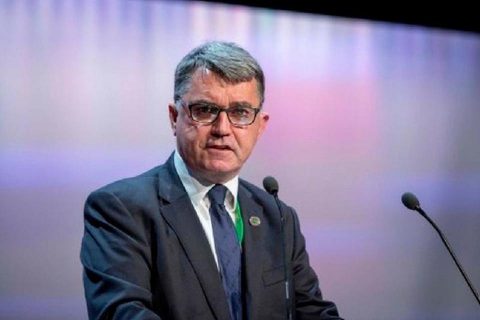 ‘Transport sector has helped the UK survive, now it should be rewarded’

The contribution the transport sector to help the UK battle through the coronavirus crisis must be rewarded by the government. This was argued by the outspoken secretary general of the National Union of Rail, Maritime and Transport Workers (RMT), Mick Cash. In his opinion, plans for recovery and a greener economy must include a commitment to developing the rail freight sector. The uncompromising union leader says there needs to be a defined strategy to safeguard the country’s future and the future of the rail freight sector.

Speaking after the release of the latest quarterly rail freight statistics, London-based Cash said that the members of the RMT trades union had played a vital role in the UK response to the coronavirus crisis. He said they had kept the country’s vital medical and food supplies moving, despite the significant downturn in economic activity overall. Now he wants to see the UK government respond by putting in place an investment programme that reflects the importance of the sector.

There have been government statements committing the economy to a greener future, but the union does not see any guarantee for jobs from Westminster. Union leader Cash was making his comments in the light of the recently published Traction Decarbonisation Network Plan from the infrastructure management agency Network Rail. That plan has been published in answer to a government commitment to remove fossil fuel locomotion from the rail sector by 2050 at the latest.

The RMT union has called on the government to put in place what it calls a National Investment Strategy for rail freight, that would safeguard the rail freight sector as the economy recovers from the coronavirus crisis. The union wants the investment plan to achieve maximum modal shift from road haulage to rail. It says it needs to ensure the UK leads the way in the fight against climate change.

Ensure the long term future of the sector

As reported earlier this week, Cash praised the rail freight sector for the part it, and RMT members, had played in helping Britain start the journey to economic recovery. “Rail freight is making a strong recovery in the second quarter of the year and we’ll keep an eye out for further updates”, he said. “This recovery is in no small part down to our members in the rail freight sector who, as key workers, have played a vital role.”

Praise for the sector’s workers is however not enough for Cash. “The Government must now finally show its commitment to this sector by ensuring its long term future with an investment strategy as part of a green new deal to protect and increase jobs in the sector”, he said. “That will see much more freight shifted from road to rail as our country not only faces a COVID-19 crisis but a climate crisis as well.”

The National Union of Rail, Maritime and Transport Workers (RMT) represents more than 83,000 members from across the UK transport industry.