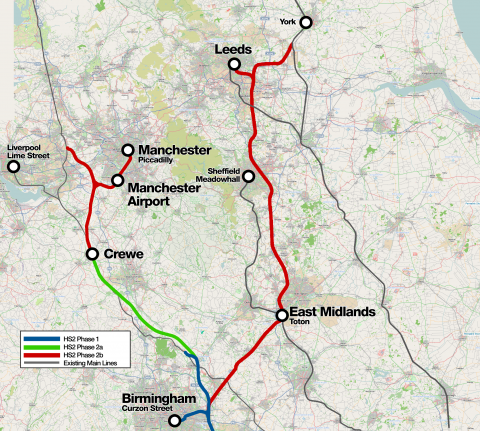 A scathing report on the sky-rocketing costs of Britain’s London to Birmingham and northwards high-speed rail project has drawn an equally high-speed reaction from the freight logistics sector, and support and criticism in equal measure for its author.

Forget the divisions of Brexit. Nothing casts brother against brother, daughter against mother, cat against dog, as much as the vexed question of HS2. Britain’s hugely controversial, hugely expensive, and hugely overdue new rail connection has split the country asunder, and even divided the team preparing a government-backed review.

Insiders were not surprised to learn that Lord Anthony Berkeley, formerly deputy chair of the Oakervee Review commissioned by the government to evaluate the future of HS2, was in disagreement with the report’s findings – even though those findings have yet to be published. Nor were many observers surprised when he resigned from the committee. It’s the depth of his dissent to the project that has caught the attention of the public at large, and brought swift comment from prominent stakeholders, including industry representatives across the UK.

In voicing the reservations of the Freight Transport Association, which represents the logistics sector in the UK, Alex Veitch, their Head of Multimodal, said the Association still supported HS2. “We are of course concerned about the questions raised in the report by Lord Berkeley. We want this to work; it is a once-in-a-generation chance to get a new world class railway – still the most environmentally sustainable land based mode.”

Lord Berkeley, a labour peer, who was working alongside Douglas Oakervee, who is himself a former chairman of the HS2 company, resigned late last year and published his own report in the first few days of this year. The headline from that is that costs are likely to exceed 108 billion pounds (127 billion euro’s) which is more than twice the current budget, and dwarfs the earliest financial predictions for the 100-mile (160km) route and its initial extensions towards Leeds and Manchester. He says the business case is unsound, and that the job creation predictions are unrealistic.

“It is my belief that there is overwhelming evidence that the costs of the HS2 project are out of control,” he says. “The benefits are overstated and that it potentially will not be delivered to Leeds and Manchester for another 20 years.” There is some sympathy for that view point, especially in the industrial north of England, where the public are unconvinced that the benefits of HS2 will filter through quickly enough, and that more funding be diverted to local projects immediately.

However, the critical need for greater capacity on the UK rail network is not in contention. “The Freight Transport Association is calling for the government to secure the future of rail freight in the UK,” says Alex Veitch. “While reports of spiralling development costs are concerning, any cost-benefit analysis should include the value of released capacity made available for freight services on conventional lines once HS2 is operational. As a more environmentally friendly mode of freight transport, the government should be encouraging the use of rail freight, but at present its growth is stifled by a lack of capacity.”

Even seven years ago, Douglas Oakervee was expressing a similar sentiment, and concerned that the impression of HS2 was entirely wrong. “I always think the most unfortunate thing was the name,” he told a national newspaper. “The media also chose to promote the speed side, rather than listen to the more mundane side of it. Yes, you can always do things differently; and yes, you can always do things better. Whether we went the right way is questionable.”

Alex Veitch echoes those concerns now, and recognises the benefits to UK industry, but issues a reminder to the project’s promoters. “FTA’s support for the project is dependent on the government providing a cast-iron guarantee that freight services will have sufficient access to the released capacity that HS2 will provide.”

There’s general consensus however that the UK rail network is in desperate need of significant extra capacity. Freight is competing for space with commuter and leisure services, and losing out in many cases, noted Alex Veitch. What is still up for debate is whether HS2 will be the right answer to that question. The publication of the Oakervee report will surely stimulate that debate further. It’s unlikely to heal the divide.

Also read: Rail freight is the real winner in HS2 in the UK