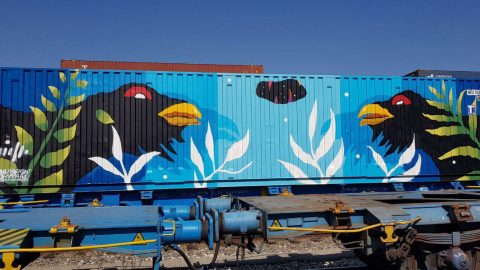 Noah’s Train stops in Spain before heading to Rotterdam

The longest mobile work of art and ambassador of the Rail Freight Forward initiative, Noah’s Train, has arrived in Spain. On Thursday 5 September it stopped in Madrid, where it pulled up again to make its way to Barcelona. It will halt in the harbour city on 13 September.

Noah’s Train has stopped in 9 different cities and it now consists of 15 artistic containers with a total length of 180 metres. After its stops in Spain, two more containers will have been added. In addition, Renfe Mercancias and Transfesa Logistics, two rail transport companies, will join the RFF coalition.

Noah’s Train is an initiative launched by several European railway companies to promote freight transport by rail. Gathered in the Rail Freight Forward coalition, they defend a common goal: reducing the environmental impact of freight transport in Europe.

Founded after the COP24 in Katowice in 2018, the Rail Freight Forward coalition currently counts 18 members. They wish to raise awareness of a transition towards more environmentally friendly modes of freight transport. In more concrete terms, they want to double the share of rail freight in Europe from 18 to 30 per cent in 2030.

The journey of Noah’s Train started in Katowice, Poland and then headed to Vienna, Berlin, Paris, Brussels, Rome, Munich, Luxembourg and Riga. It is now headed for Rotterdam.

The train will roll on through Europe until October. Then, one container on the train will be shipped to Chile, where the climate top COP25 will take place. The train has then made a journey of a year; when it left Katowice, the Polish city was the scene of this same climate top in 2018.