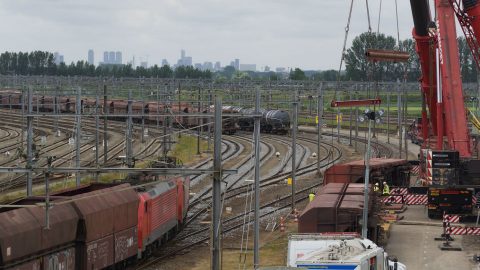 Incentive scheme in the Netherlands for use of less frequented sidings

In the Netherlands an incentive scheme is under discussion to discourage the use of busy sidings by making the less frequented sidings more attractive. Dutch infrastructure manager ProRail is negotiating such a measure with rail operators. This is revealed by ProRail’s Director of Capacity Management Dimitri Kruik, as reported by sister publication Spoorpro.

“We are currently investigating, together with carriers, whether a performance scheme can be introduced with a sort of lever, to discourage the use of busy locations and to make less busy locations more attractive. That can be compared with measures to combat the traffic of city centers”, he explains.

The network statement 2020 was recently published, which includes the tariffs for the use of the railways. This also includes a new distribution key for the preparation and shunting of rail equipment. “The new user fee includes an additional levy (mark-up) from the ministry. In addition, the ministry has provided a subsidy. If you exclude this, we are at an overall cost level that is comparable to that of Germany”, “says the director of Transport and Timetable.

From 2020 onwards, carriers will pay per minute instead of per day for setting up trains on marshalling yards on the mixed network. Now, setting up a train is free for the first three to four hours. In addition, costs are calculated based on the length of the track that is taken into use.

A calculation made earlier by interest group RailGood shows that for a long stay on A and B locations (Maasvlakte West, Maasvlakte West-west, Maasvlakte East, Europoort, Botlek and Pernis) the 2020 rates drop compared to this year. However, according to the interest group, these locations are not suitable for longer stays, because these locations are congested and it is important to move on quickly. The rented tracks are meant for a longer stay, but the rates are higher there. ProRail will now look at these rates again, together with the carriers.

“We have to charge certain costs. The distribution key can be different, but the total costs cannot. If we set rates, they will be positive for some and negative for some. It is difficult for us to accommodate everyone in this. We will closely monitor the effect and possibly adjust it through performance schemes or in the following period of rates. For now the rates are fixed and we focus on reliability, capacity and efficiency, “explains the Director of Transport and Timetable.

In addition, the new tariff calculations mean that DB Cargo will have to deal with a substantial cost increase at Kijfhoek for the preparation and shunting of individual railcars. DB Cargo is currently the only user of the hill on the marshalling yard. For this, costs will be charged from 2020 onwards. In response to criticism, ProRail has adjusted the amounts in the Network Statement 2020.

The direct costs of 2.5 million Euros will be charged step by step over several years. In 2020, 20 percent of this rate (0.5 million Euros) will be charged for the use of Kijfhoek. The new user fee consists of direct costs and an additional charge (mark-up, ed.). “We did not have a separate rate for hilling (a specific procedure carried out) at Kijfhoek. From 2020 we will implement this rate with an adjustment scheme”, says Kruik.

DB Cargo is the only user of Kijfhoek, a classification yard for individual railcars in the Netherlands. Only Kijfhoek is equipped with a maneuvering hill, rail brakes and a hill process control system. From 2021 to 2023 the hill system will be renewed and the number of tracks and points will be renewed.

Owner of interest group RailGood, Hans-Willem Vroon, will speak about the costs of railway in the Netherlands at the Multimodal Event, to be held on 27 June in Rotterdam (in Dutch). He will discuss track access charges, the siding scheme and the rollout of ERTMS. His presentation is part of the Rail Stream, which is one of the five parallel conference programmes at this event.