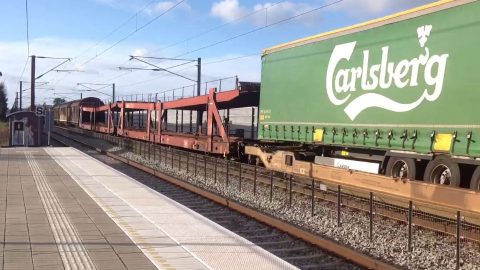 The temporary ban on the use of semi-trailers on pocketwagons in Denmark has caused considerable costs to railway operations and logistics chains in Europe. This concludes the EU Agency for Railways (ERA). “ERA understands why the Danish safety authorities have issued the ban. Our concern is, however, that this will lead to an increase of costs and freight transport by road.”

On 8 January 2019 the Danish Transport Ministry (DtM) banned the circulation of pocket wagons on the Danish railway network. This was in response to the tragic accident on 2 January, where parts of a semi-trailer train came off and hit a bypassing passenger train, resulting in eight fatalities.

The ban was temporary and according to reports applicable for a two-week period. Moreover, the ban could be lifted if the single railway undertaking submitted documentation that proves the correct fixing of the kingpin of the semi-trailers into the supporting bock of the pocket wagon. This was accomplished by Hector Rail, CFL Cargo, TX Logistik, Hupac and also DB Cargo, the operator which was involved in the accident.

But the safety measures, although understood, affected the intermodal traffic industry of Europe, said ERA. Although it does not clarify what this means in numbers, it points out the importance of the transport mode for the freight sector. Between 2008 and 2017 more than 3 million craneable semi-trailers were carried in pocketwagons across Europe as the railway part of their multi-modal journey; equalling 950 units per day. Key routes for this type of transport are between and within France, Luxembourg, Germany, Sweden, Belgium, Austria and Italy. “The use of such logistics systems has done much to reduce traffic congestion, reduce transport costs and improve safety.”

With the last remark, it hints towards the relatively less safe road transport. “According to our records, there have only been two accidents with pocketwagons during the last 13 years. Statistics show that transporting goods by rail is 19 times safer than transporting those same goods by road. When broken down by individual country the transport mode is safer than road in a range from twice as safe, up to 70 times safer”, ERA states.

“In Denmark the figure is 18 times safer. This type of rail transport has an exemplary safety record. The accident on 2 January was the first ever reported accident in the country that involved a pocketwagon, while according to Danish statistics, just under 463 thousand of these trailers had been transported by rail in the period 2010-2018. Had these trailers been transported by road, we might speculate that there would have been one accident per 25 thousand trips, compared to one accident per 463 thousand trips by rail.”

This being said, the regulatory body of the EU, as well as national regulatory agencies have not left the accident undiscussed. Steps have been taken on all levels to analyse what went wrong, and whether this means that the statistics of the last several years are a merely good fortune.

The exact cause of the accident is still being investigated. This is done by the Danish The Danish national investigation body (NIB). Meanwhile, other member states have taken similar steps to see whether the transport mode used for years is indeed safe. This is true for the Dutch Human Environment and Transport Inspectorate (ILT), which in turn cooperates with the German, Belgian and Danish authorities on the matter.

The Inspectorate recently carried out a number of inspections and more have been scheduled for this month. “In the previously carried out inspections we found empty trains, so we have planned new inspections. The results will follow later. During the checks, the ILT wants to know whether trailers placed on the wagons/trainsets are properly locked, so that the load is stable and cannot slide. We also check whether the wagons are properly locked at departure.”

Earlier this month, the German inspection carried out a pocketwagon check, the ILT said. “They keep us informed about the results, and we will discuss them further with ERA in order to see what role they can take. These inspections are important, because freight transport goes all over Europe and that must be done safely”, the Dutch authority noted.

“Investigations need to be done to understand the reasons why the semitrailer was torn from the wagon; in case additional safety measures are needed, they should be introduced Europe-wide in a harmonised and coordinated way”, commented the European Rail Freight Association (ERFA).

But also the Brussels-based group points out that semi-trailers loaded on pocket wagons have safely been used in the rail sector for more than forty years. “We await the results of the investigation to understand the exact reason of the accident and to get a clear recommendation on the appropriate measures that could be put in place in the future.”

Whether a European wide safety measure is possible, the ERA cannot say. “The main role of the ERA in preventing accidents is to facilitate the exchange of information between Member States. The investigation of incidents and accidents in EU railways is a national task. It is primarily the responsibility of those discovering an issue to disseminate it to others.

The NIB should – according to EU legislation – finish an investigation within one year after the accident or incident. It is also up to the NIB to inform other NIBs and NSAs (National Safety Authorities) about (intermediate) results. The EU Agency for Railways has put in place several IT-platforms for sharing information.”