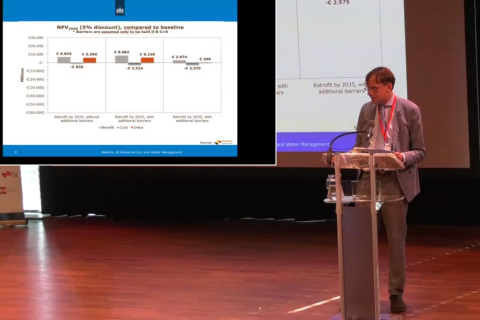 ‘Discounts for noise reduction in trains should be mandatory in EU’

The Dutch government pleads for a mandatory bonus scheme on EU level incentivising the retrofitting of wagons. Retrofitting is the most cost-effective way to reduce noise pollution, but this should not be limited to a few European countries, Hinne Groot of the Dutch Ministry of Infrastructure and Watermanagement said at the Track Access Charges Summit, held in Amsterdam on 4-5 April.

Since 2015, it is legally possible for infrastructure managers to include a malus or bonus in the track access charge for the use of retrofitted good wagons, as stipulated in Regulation (EU) 2015/429. This voluntary measure was adopted by Germany, Switzerland, Austria and as Groot explained, in the Netherlands, where a differentiation regarding retrofitting was already part of the policy, but this policy was adapted to be in line with EU legislation.

“The Netherlands takes an active role in reducing noise pollution. It is a densely populated country, so noise pollution is quite an important issue”, he explained. “Trains are the second most dominant source of environmental noise in Europe, and ten per cent of the European population is exposed to significant noise pollution from rail transport, in particular freight transport.”

While retrofitting should be combined with infrastructural measures, such as placing sound barriers next to railways, it is the most cost-effective method for reducing noise pollution, he explained. De Groot based his conclusion on numbers of Panteia. If the European freight were to be completely retrofitted by 2021 and additional barriers were to be placed along the network, this would result in a financial benefit of 8,682 Euros, at a cost of 6,158 Euros.

“Rail freight traffic is expected to increase by more than fifty per cent by 2030, compared with volumes in 2010 levels. Noise pollution will be a major reason for public opposition to rail transport in densely populated regions in Europe. Therefore, reducing rail noise is a condition to the development of the rail sector”, he urged.

The Netherlands has spent 45 million Euros since 2012, and it is planning to spend another 800 million Euros up till 2030 to tackle noise pollution on railway and road together. “Although this includes two sectors, this is serious money for such a small country as ours”, said de Groot. However, rail freight has a largely international character and therefore, any measures at source can only be taken the international way.”

What is important, is that the market receives financial support at an EU level, de Groot emphasised. “The costs of retrofitting are carried by the wagonkeepers and railway undertakings, although the benefits are for society at large. There should be a way to transfer these societal benefits into the railway industry.”

Apart from financial incentives in track access charges, there are certain financial schemes towards this aim, such as direct state aid, the Connecting Europe Facility (CEF) and the agreement that Cohesion funds can be utilised towards the retrofitting of freight trains. Currently, a ban on noisy trains is under consideration. But what the Netherlands would like to see, is that differentiated track access charges to incentivise the use of more silent trains becomes mandatory, de Groot argued.

The effect of Regulation (EU) 2015/429 is currently evaluated. Discounts for retrofitted and silent trains are due to expire in 2021, when possibly new legislation will set a new legal framework. In addition, the European Railway Agency (ERA) has considered implementing quite routes, where only retrofitted trains may pass. It has consulted the market in the first quarter of this year and will take a decision on this measure by the end of 2018, de Groot summarised.

“A lot is being done and we are much further in this development than ten years ago. There is a Single Entry Point, a cooperation between European countries that apply a bonus for retrofitted or silent trains. While these bonuses may differ in various countries, there is a single administration with this purpose.” De Groot urged that market players should act now, is they can benefit from the financial gains for at least three more years.