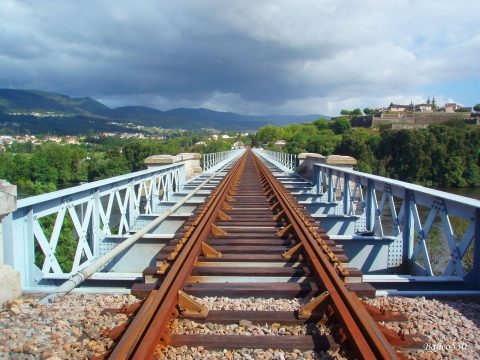 The Portuguese government says it will begin improvement works on the rail track between Viana do Castelo, a northern port, and Valença, a town close to the Spanish frontier marked by the river Miño. The work will start in the second quarter of 2017, nine months later than planned.

It has a total budget of 83.2 million Euros, with the EU covering 59.2 million Euros and the Portugese government the remainder. The work will eliminate rail level crossings with barriers, enlarge stations so they can receive and accommodate 750-metre trains and electrify the 45 kilometre stretch between between the two towns. This infrastructure is essential for rail freight connections between northern Portugal and the Spanish region of Galicia.

The rail freight traffic between Galicia and northern Portugal has increased dramatically in the last few years, both because of cars manufactured in Vigo (Spain), Spanish tree supplies for Portuguese paper factories, and the Portuguese exports to Spain, mainly automotive equipment and packaging.

The Miño frontier is one the oldest and most stable in Europe. It was created in the 11th century when the Portuguese county decided to establish itself as independent kingdom with respect to the disappeared medieval kingdom of Leon, now part of north east Spain. Traditionally, there were few communication infrastructures due to the war conflicts and commercial rivalry between Spain and Portugal to control sea traffics to South America and South Africa until the 1800s.

When Spain and Portugal joined to the European Union in 1986, Portugal banked on Iberian (Spain plus Portugal) market integration, leaving its traditional focus on developing links with UK, its traditional ally, and with its former colonies in Africa and Asia (Green Cape, Guinea Bissau, Angola, Mozambique, Goa, Macau and Eastern Timor).