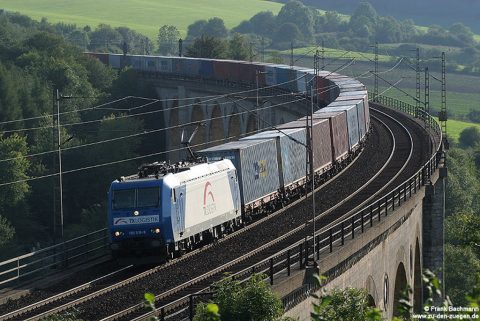 Proposed new EU rules aimed at creating a more customer-oriented rail freight network have received the formal backing of the European Rail Freight Association (ERFA). The body which represents more than 30 members across Europe says the rules, which essentially are designed to make sure that line managers and train operators work much more closely over infrastructure works, represent an ‘important step forward’ in the drive to improve the reliability and quality of rail services.

Julia Lamb, Secretary General of ERFA says the organisation, which represents new entrants, believes the adoption of EU regulations designed to improve the international coordination of infrastructure works are a ‘positive step forward’ in working towards a scenario in which rail becomes more competitive. “Improved rail performance is essential to make rail a more attractive transport mode for customers and to encourage modal shift from road to the eco-friendly rail,” she told RailFreight.

Late information regarding planned disruptions; limited provision of and/or unsuitable diversionary routes; and uncoordinated infrastructure works across one or more networks all contributed, she continued, to a ‘poor quality’ of rail service. Furthermore, a ‘lack of clarity’ in current Rail Freight Corridor legislation remains a barrier to effective coordination of infrastructure works.

This summer’s Rastatt crisis, which saw rail freight operators lose millions of Euros after a landslip in Germany saw a key stretch of line closed for some eight weeks, coupled with the planned construction works which disrupted Europe’s north-south rail freight routes had been the ‘final wake-up call’. ERFA believes that to tackle this, better coordination of planned line closures and restrictions was a good basis for better management when there are unplanned disturbances.

The European Commission recently published its updated directive on the establishing of a ‘single European railway area’, setting out the core responsibilities of the rail sector’s principal stakeholders, in particular all national rail infrastructure managers (IM) and railway undertakings (RI) or operators. The 17-point plan sets out in detail what is expected of them, with a strong emphasis on better communications and the specific timescales that they must adhere to.

In a detailed response to the plans, Brussels-based ERFA says a key element of any IM’s responsibilities is the effective management and coordination of planned infrastructure works. To this end, the new framework provides the platform for consultation as well as coordination obligations on IMs aimed at minimising disruption to services.

Julia Lamb added: “The infrastructure manager’s crucial role in planning construction works should also be facilitated by long-term investment commitments from national governments. It is an obligation under existing EU rules for Member States to commit long term public financing for rail, thereby providing a stable framework for infrastructure development. ERFA hopes that joint efforts by national governments and infrastructure managers to support their rail sector will guarantee the viability of competitive rail transport in Europe.”

1) Early advance warning – for major capacity restrictions (more than seven days, affecting 30 per cent of traffic), IMs are obliged to set up a coordination platform, together with users and service facilities to prepare timetables, including the provision of diversionary routes.

2) Early coordination work – IMs, including those impacted by the rerouting of trains, are obliged to coordinate amongst themselves capacity restrictions more than two years before changes to the working timetable.

3) Involvement of users in the early coordination work – railway undertakings and service facilities have a right, subject to invitation from IMs, to be involved in the coordination work for international rail services.

4) Early and clear communication – the planned day, time of day, the section of lines affected and the capacity of diversionary lines shall be provided to users more than 24 months in advance and updated 12 months in advance of the change in the working timetable.

“The new rules are a positive step in the right direction and ERFA urges infrastructure managers to start working on their effective implementation as soon as they enter into force at the end of the year,” it adds. “Nothing prevents infrastructure managers from going over and beyond the basic framework to support rail’s growth and competitiveness.”

The directive says that one working rail timetable shall be established per calendar year, with the change taking effect at midnight on the second Saturday in December. ERFA says the impact of the changes will start to be felt from the 2018 timetable change, but most will kick in for the 2019 timetable change, with the full impact being felt for the 2020 change. ERFA has members in 16 countries, comprising freight operators, wagon keepers, service providers, forwarders and national rail freight associations, as well as passenger operators.