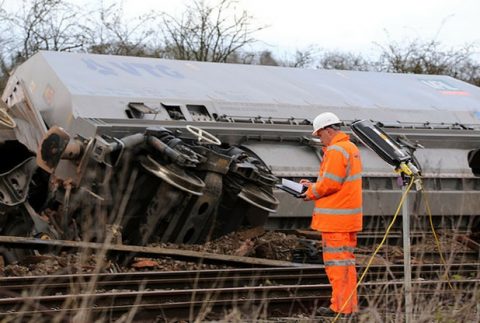 UK rail investigators say a freight train which derailed last month left the track near a section which had only been laid in 2012. No-one was injured in the incident in Somerset, in the south west of England, but major recovery work and track repairs were needed.

An initial report by the Rail Accident Investigation Branch (RAIB) said the incident on March 20th happened close to where a set of trailing points had been replaced with plain track. The full investigation will look into precisely how the incident happened and why.

The train was travelling at about 20 miles per hour (approximately 32 km/h) when it derailed as it passed over a section known as East Somerset Junction. Six of the 38 VTG wagons, which were carrying stone aggregate, came off the tracks. The class 59 diesel-electric locomotive-pulled train stopped with the automatic brake system.

Major damage was caused to the railway infrastructure, with around 100 metres of track, including switches and crossings, destroyed. Freight and passenger services between the west of England and London were severely disrupted as a result.

As part of the investigation, the RAIB will also consider how well the track was maintained, how the wagons were loaded, the condition of the wagons and any ‘underlying management factors’.

It comes just weeks after another RAIB investigation, this time into an incident on the outskirts of London in January, found it had happened near where new tracks had only recently been laid. A busy freight route in the south west district of Lewisham was closed for a week as a result.