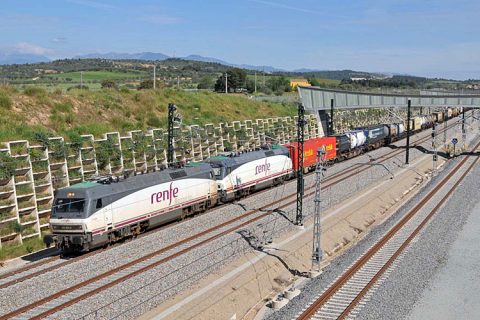 Renfe and DB fined for anti-competition in Spain

Rail freight subsidiaries of the Renfe and Deutsche Bahn groups have been fined a total of 75 million Euros for anti-competition practises in Spain. The companies affected which are affiliated to both groups account for more than 80 per cent of the country’s rail freight traffic.

The National Commission for Markets and Competition (Comisión Nacional de los Mercados y la Competencia, or CNMC), said Renfe had commercially discriminated against other freight carriers, while all the companies involved had treated each other as privileged clients and providers.

The CNMC said that it had established that the various agreements between Renfe Group and the Deutsche Bahn Group had an effect on the competition. Through these alliances, these groups, which theoretically should have competed with each other, were able to maintain the pre-existing status quo of the liberalisation of the Spanish freight sector.

As a result of these agreements, a situation in which the only competitor of Renfe that had available traction (Transfesa, owned by the Deutsche Bahn Group), sublet the service to Renfe and to another DB Group company. Through this, Renfe was positioned as the only company with its own traction capacity in the Spanish market.

The sanctioned companies had created a series of links between them that allowed them to position themselves as privileged customers and suppliers, added the CNMC. One highlighted example was the rental of locomotives, trucks and other activities essential for this type of transport.

“The practices have affected trade between different countries of the European Union and limited the competitive pressure that could be exerted by international operators in the Spanish freight market by rail,” said the CNMC, whose role is ‘preserving, guaranteeing and promoting the proper functioning, transparency and existence of effective competition in all markets and productive sectors for the benefit of consumers and users.’

In a statement describing the sanctions as ‘disproportionate and unjust’, the Renfe Group said it would be appealling against the penalties.

“The new Renfe team has designed a management strategy in Renfe Mercancías to be implemented in the period 2017-2019, to continue operating in a liberalized market,” it added.