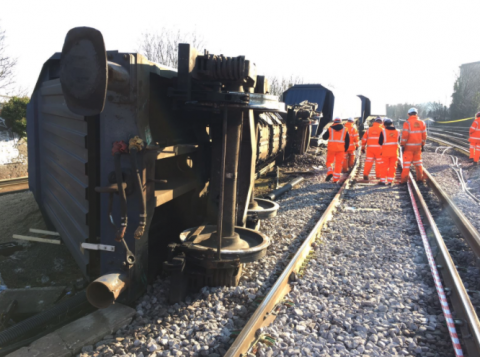 An investigation into a freight train derailment in London that caused huge disruption has revealed that the incident occurred where new tracks had recently been laid and  follow-up engineering work done just two days before. A busy freight and commuter route in the south west district of Lewisham was closed for six days when two freight train wagons overturned on January 24, causing major damage to the tracks.

No-one was injured in the incident. However a preliminary report by the Rail Accident Investigation Branch (RAIB) says new track work at the junction was installed on January 14 and 15, with ‘follow-up engineering work taking place over the weekend of January 21 and 22.

The train involved had come from a loading terminal at Grain, on the River Thames estuary. It comprised a class 66 diesel-electric locomotive and 18 bogie hopper wagons. It was carrying building sand to Neasden, in north-west London. The wagons that derailed were the 16th and 17th from the front.

Track work at Courthill Loop South Junction was new, says the RAIB. It was made up of modular panels of switches and crossings that had been part assembled offsite. They had been delivered and installed as part of engineering work carried out on the weekend of 14 and 15 January 2017. Follow-up engineering work had been carried out at the junction on the weekend before the derailment.

The RAIB investigation will identify the sequence of events that led to the accident and how the wagons derailed. It will also consider the condition of the wagons and how they were maintained; how they were loaded; the design of the new track work at the junction and how it was installed; the condition of the track and its geometry, and any relevant underlying management factors.