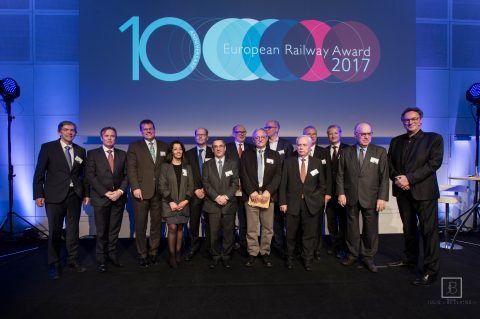 The achievements of the European freight sector over the past decade were among those celebrated at the 10th European Railway Awards – a ceremony with a difference in that no awards were handed out. More than 500 guests were in Brussels for the annual showcase organised by the Community of European Railway and Infrastructure Companies (CER) & European Rail Industry (UNIFE).

Rail stakeholders and high-level politicians were among those invited to pause, look back and pay tribute to all of the past winners across the technical and policy fields, and everyone who has contributed to making the awards so successful since first being held in 2007.

The CER brings together more than 70 railway undertakings, their national associations, infrastructure managers and vehicle leasing companies. The membership is made up of long-established bodies, new entrants and both private and public enterprises, and represents some 80 per cent of the rail freight business in Europe. UNIFE gathers around 80 of Europe’s leading large and medium-sized rail supply companies active in the design, manufacture, maintenance and refurbishment of rail transport systems, subsystems and related equipment.

Joe Mizzi, Maltese Minister of Transport (sixth left), who was representing the current Maltese Presidency of the EU at the ceremony, told the audience: “In addition to waterborne transport by sea and inland waterways, heavy rail transport is one of the most environmentally sustainable modes for carrying bulky freight. During our Presidency of the EU Council we will aim to encourage further research and innovation in rail transport.”

Keynote speaker was Maroš Šefcovič (third left), Vice-President for Energy Union at the European Commission, who described rail as a ‘vitally important transport mode’, adding: “The European Commission works in three ways to specifically promote rail transport: by opening up the rail transport market to competition, by improving the interoperability and safety of national networks and by further developing railway infrastructure.”

Representing the European Parliament was MEP Karima Delli (fourth left), Chair of the Committee on Transport and Tourism, who said: “There is a huge potential for rail within sustainable urban mobility: better air quality, useful working time, simplification through digitalisation. Train is a ‘win-win-win

Laurent Troger (second left), Chairman of UNIFE and President of Bombardier Transportation, one of the world’s leading locomotive suppliers to the freight industry, said: “Over the last ten years, the European Railway Awards have recognised the players in our European rail industry that have consistently led the way forward with efficient and sustainable rail transport. New technology trends like digitalisation are exciting opportunities to better address urbanisation or climate change, while close collaboration and fair competition among rail stakeholders will enable us to meet the needs of tomorrow’s mobile society.”

Finally, Libor Lochman (far left), Executive Director of the CER, described the last 10 years as a decade of ‘outstanding political and technical achievements in the development of sustainable rail transport’. He added: This event demonstrates that all players in the European railway sector – from infrastructure managers, rail operators and suppliers, to our partners in governments and the European institutions – are working together for the benefit of the customers. This event also shows that we speak with one voice when it comes to our common goal of creating an efficient, competitive, customer-focussed and sustainable railway network.”