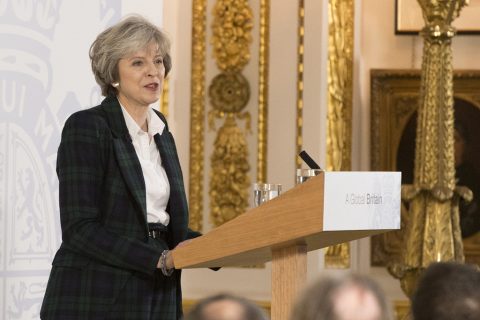 Prime Minister Theresa May has publicly stated that the UK Government will ‘continue’ to support the increase of rail freight in the UK. Replying to a question put to her by a fellow Member of Parliament (MP), she also acknowledged concerns about how the UK’s standard railway loading gauge size was potentially holding back progress.

Speaking at the traditional weekly Prime Minister’s Questions session, Kelvin Hopkins, Labour MP for the Luton North constituency, reflected on how the previous week’s arrival of the first ever freight train from China to the UK had demonstrated the ‘massive potential of rail freight’.

“However, continental rail wagons and lorry trailers on trains cannot be accommodated on Britain’s historic rail network because its loading gauge is too small,” he added. “Will the Prime Minister therefore consider giving positive support to the GB freight route scheme, which will provide a large-gauge freight line linking all the nations and regions of Britain both to each other and to Europe and Asia? It would take five million lorry journeys off Britain’s roads every year.”

The Prime Minister replied: “The honourable gentleman raises difference in gauges on railways here and on the continent, which has obviously been an issue for some considerable time. We want to encourage rail freight, we have been encouraging it, and we will continue to do so.”

The UK Government’s Rail Freight Strategy, published in October, and developed in partnership with operators, customers and the UK’s infrastructure manager Network Rail, outlined four main challenges: A need to bring what is a competitive industry together to sell its collective benefits to potential customers, decision-makers and the public; track access charging; a demand for innovation and skills; and network capacity.

As traditional markets such as coal and steel continue to fall off, the strategy also highlights environmental issues and key partnerships between UK and European operators. Digital signalling advances such as ERTMS, it adds, have the potential to unlock existing constraints on capacity and enable future growth in the rail freight market.