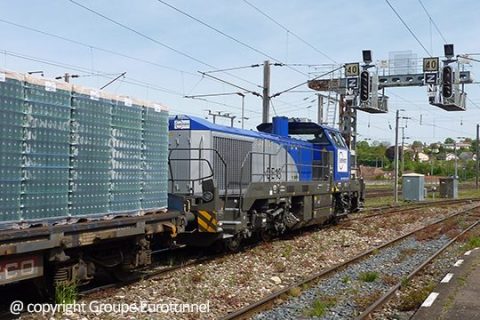 Le Shuttle Freight carried as many trucks between the start of the year and the end of November as the whole of 2015, the company has announced. A total of 1,483,741 trucks were moved between January 1st and November 25th.

In the first 10 months of this year, Le Shuttle’s truck-carrying service grew by more than 12 per cent, largely outperforming the market, which only increased by five per cent. It continues the firm’s good performance in 2015, itself a record-breaking year.

Jo Willacy, Commercial Director for Eurotunnel, said: “Our business creates extraordinary value for our customers who are themselves confident in their outlook for 2017. The investment programme we have pursued, will ensure that we are able to continue this growth through the coming years.”

It follows a report, Economic Footprint of the Channel Tunnel fixed link, which assessed the economic value of the tunnel to trade and tourism, and its role in the economic growth of the UK. Some 30 per cent of UK exports (worth 43.6 billion pounds) to the EU and 22 per cent of imports (worth 47.8 billion pounds) from the EU rely on the speed and ease of use of the Channel Tunnel, say Ernst & Young, the report’s authors.

Jacques Gounon, Chairman and Chief Executive Officer of Groupe Eurotunnel said that regardless of the Brexit process, the UK’s trading relationship with European countries continued to develop: “This means that the Channel Tunnel remains vital to the UK, to connect it with Europe and beyond and it will continue to form a key part of the UK’s transport infrastructure,” he said. “One of the most striking aspects of this report by Ernst and Young is the geographical range of companies who rely on the Tunnel to do business. The Tunnel not only serves companies in London and the South East but right the way through the Midlands, the North of England and beyond.”

Steve Hanley-Cook, of DHL Freight, said: “Historically the tunnel has provided transit time advantages such as efficient border checks and customs controls. It is, however, important in light of upcoming changes to trade relations between the UK and continental Europe, that any agreement does not seek to dilute these advantages.”

These falls were partially offset by construction and domestic intermodal, with construction reaching its highest amount for any quarter since the start of the quarterly time series in 1998-99 Q1, with 1.10 billion net tonne kilometres.