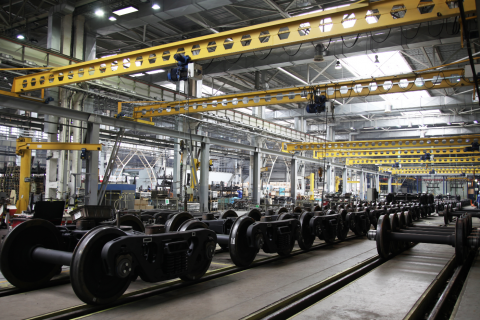 ‘New generation’ freight wagons operated by the Russian United Wagon Company (UWC) are now capable of travelling an incredible one million kilometres without the need for routine maintenance. The bold claim was made by its Deputy CEO for Technological Development, Dimitry Loseve, who also told an international conference in Moscow examining the rail delivery of mined materials in Russia that this new type of wagon has an annual operating distance almost double that of standard cars.

Delegates at Rail Delivery of Mining and Smelting Cargoes in Russia heard Mr Loseve describe the design efficiency and results that have been obtained in service of the 12-9853 model gondola car, which makes up the highest quantity on the Russian Railways network. Made by the Tikhvin Freight Car Building Plant (TVSZ), nearly 30,000 of the cars are in service, which accounts for around 45 per cent of the entire fleet of new generation gondola cars. A car’s average annual running distance is 150,000 kilometres, he said, almost double that of standard cars.

The maximum distance travelled by the new TVSZ cars without decoupling is 590,000 km, a record for the Russian rail freight sector. According to data produced by the Rail Car Design Bureau of Russian Railways, he said, the frequency of repairs that require decoupling is nearly six times lower for these new TVSZ cars over a distance of one million km.

Statistical analysis of the car’s performance shows that the the trouble-free operating resource of main aggregates on the new generation cars will be underused, on average, by 40 per cent, when the time comes for their first scheduled depot repair at 800,000 km. This suggests that distance travelled between scheduled maintenance could be extended to 1 million km for the TVSZ cars, which will make them much cheaper to operate through the whole of their life cycle.

With the support of Russian Railways, Mr Loseve added, greater reliability and fault tolerance of the TVSZ freight cars have enabled creation on the rail network of 150 sections – each over 6,000 km long – with guaranteed maintenance-free service between loading and unloading points. The comparable distance for a standard car does not exceed 1,300 km.

Since the beginning of 2017 one of the most common interim repairs that require decoupling has been machining of wheel sets. In nearly a third of these cases, the defects are on the wheel surface in contact with rails and are caused by damage to the wheel sets during shunting operations on non-public rail sections and when separating railcars at hump yards. Decoupling repairs are also made by damage to the car body during loading or unloading, since body damage can lead to hidden defects of bogie components, such as the axle box, springs and castings,

The UWC senior manager also stressed that further increases in service life of the freight car fleet and lowering of current needs for decoupling repairs depend primarily on operating conditions and better practice in handling of cars.

Comprising specialists from the Gradalogistic group of companies, the conference focused on the problems of cooperation between metallurgical companies, forwarding companies and Russian Railways, and examined key trends in the railway transportation of mining and metallurgical cargoes. One key area of focus was the market of open-top wagons, or rather their deficit due to involvement in the transportation of Russian coal and the full use by owners of their cars for these transportations. An alternative option for the export of Russian coal was the proposal to build specialist ports.

Dear Madam/Sir!
My name is Kristóf Magyari, a mechanical engineering student at BME, from Hungary.
I am writing my Master of Science thesis about standardizing the brake systems globally.
I am sending this letter to You, because I would like to request some important data concerning the russian freight train system to my essay. These are mentioned below:
stopping/braking distance
axle load
brake force
speed limit
I look forward to hear from You.
Yours Sincerely,
Kristóf Magyari