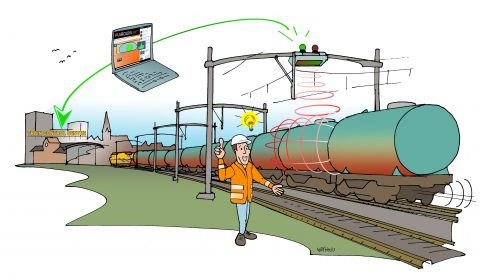 A powerless microchip which detects oil and chemical leakage caused by corrosion has the potential to help monitor the condition of rail freight wagons, say Dutch engineers at Arcadis, as they prepare to present their invention at a national innovation contest in the USA.

Initially developed for wider the oil & gas market, the chip is read by ‘smart’ readers, and is potentially a solution for what Arcadis describes as ‘poor’ current methods for detecting the major issue of corrosion and leakage. The first prototype of the chip, which fits on a freight tank gasket, has been tested on liquids, as it has a specific element which reacts to hydrocarbons which make up most of the chemical components of crude oil.

The chip works via a radio signal, utilising Radio Frequency Identification (RFID) technology, and therefore can transfer information wirelessly. It could then communicate with reading portals placed at strategic locations along a freight rail line, providing operators with critical information about any leakages detected. There is also the potential for it to work with gases, but Arcadis has not yet tested this.

Martin Voorma, Innovation Manager at Arcadis Nederland, said: “We did some projects for oil and gas clients with regards to engineering pipes, and concluded that there was no suitable method for detecting leakage and corrosion at low cost, and which needs no power, and as a result we looked into developing this solution.

“During those years I noticed incidents in the media relating to leakage from rail wagons, which disrupt the rail traffic,” he added. “So it got me thinking: could this chip also combat that challenge, through the early detection of problematic wagons and prevent the problem becoming worse?” Though still early days, tuture developments include the possibility of the chip communicating with drones, sharing information on a wider online network and measuring CO2 emissions.

Voorma and his team will be in the USA later this month for the second annual Innovation Contest, organised by the American Society of Civil Engineers (ASCE). The three-day event will see Voorma’s team present their ideas to a panel of potential investors, in a format based on ‘Shark Tank’, a popular US reality TV show. If successful, it will alsol be a double success for Voorma, who won this challenge last year on the topic of Infrastructure & The Internet of Things. “We are very excited by this challenge, and we hope that this helps us to introduce this new technique to the market,” he added.