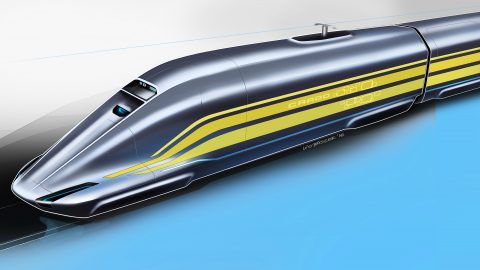 Ambitious designs for the fully automated ‘freight trains of the future’ have been unveiled by transport researchers from the German Aerospace Centre (DLR or Deutsches Zentrum für Luft).  The ‘Next Generation Train (NGT) Cargo’ features an ultra-high level of automation, can travel at high speeds and uses single wagons and end cars, enabling a completely new concept for rail freight’s transportation of goods.

The single wagons will be fitted with their own electric drive systems, which store energy recovered during braking, and sensors that will automate the operation of the service. The DLR says the coupling and uncoupling of wagons accounts for up to 40 per cent of overall delivery costs and, so by introducing autonomous wagons there is the clear potential for saving time and resources.

Design images unveiled by DLR show the wagons enclosed in a more aerodynamic body shell. The aim is that by removing the gaps between the wagons, this revolutionary design will ensure a reduction in wind resistance and less noise.

Johan Winter, a researcher at DLR who is leading the NGT project, said: “We can transport a vast range of goods flexibly, and with low use of resources, minimal deployment of personnel and short transport times. Freight transport is currently dominated by block trains that are not shunted and that use a large number of wagons to carry large, standard volumes of freight from point A to point B.”

“Freight transport is currently dominated by block trains that are not shunted and that use a large number of wagons to carry large, standard volumes of freight from point A to point B,” added Winter. “This is because, until now, a very elaborate process using rigid operating procedures underlies single wagon transport. Coupling and uncoupling wagons, picking them up and delivering them is very time- and resource-intensive and account for 30 to 40 percent of the overall costs.”

DLR said a large number of manual coupling processes leads to long idle periods for individual wagons and an average system speed of just 18 kilometres per hour for single-wagon transport. A lead time of approximately five days is required to make the personnel, material and routes available.

To make single-wagon transport fit for the future, the NGT’s ‘intelligent freight wagons’ have a separate drive based on electric motors and a battery that stores energy recovered during braking. This makes it possible for the single wagons to shunt autonomously, without the need for shunting staff and shunting locomotives or overhead lines.

Individual wagons are also equipped with the sensors necessary to enable them to travel the final kilometres to the customer automatically and autonomously. It means it can be located at all times and customers can have precise details about the current status and expected arrival time of their freight. The wagons can also be driven directly into ports, transshipment stations or logistics terminals, right up to the high level racks, where they are also then loaded or unloaded automatically.

DLR said the ‘politically intended displacement’ of freight traffic from road to rail was not happening, while at the same time, freight traffic would continue to increase, in Germany alone by almost 40 per cent by 2030. “This makes it all the more important that we develop innovative logistics, production and vehicle concepts such as NGT Cargo, to exploit the societal, ecological and economic benefits of rail freight transport,” added Joachim Winter.