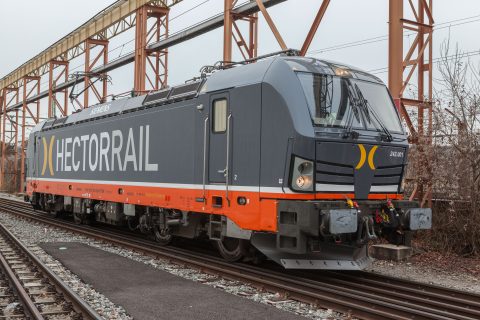 Swedish transporter Hector Rail is expanding the use of its innovative electricity-generating locomotives through a new deal with SCA Skog to transport wood to sawmills in northern Sweden. This latest innovation is more good news for the company which has also increased the frequency of its Germany-Sweden service operated with Samskip Multimodal.

Hector Rail locomotives use electric brakes which generate power that can be re-fed into the railway’s system and used by its other vehicles. Using this type of locomotive is the most environmentally friendly alternative to providing land-based transport. The wood will be moved from Sundsvall in the south to Piteå, and with its existing services means Hector Rail will soon be moving about 3.5 million cubic metres a year for SCA.

As a result of its renewed deal with SCA Skog, which lasts until 2027, Hector Rail able to invest further in new locomotives which not only regenerate electricity when braking but can haul heavier loads and shunt in and out of terminals without a catenary (overhead support). Wagons will also be replaced with a new fleet with more loading capacity.

Mats Nyblom, Managing Director of Hector Rail, said: “We are extremely proud and happy to receive renewed confidence from SCA Skog. We have worked with innovation and with extensive work we have been able to modernise the entire transport and really offer something new.”

The frequency of its partner freight service with Samskip Intermodal meanwhile, which runs between Germany and Sweden, has risen to six round trips a week. This reflects a successful partnership established in 2008 with the first-ever direct freight services between Scandinavia and the rest of Europe.

Services are are being increased between Helsingborg in south west Sweden and Duisburg in the Ruhr area of western Germany, via Copenhagen, and also builds on existing services between Duisburg and the Swedish cities of Malmö, Almhult, Nässjö, Katrineholm and Gothenburg.

The Duisburg–Helsingborg train, which links the Scandinavian-Mediterranean and North Sea-Baltic European TEN-T Network Corridors, is an overnight service, providing fast door-to-door transit times. Collections can be done in a 300-kilometre radius around Duisburg and delivered in the area of Helsingborg the next day.

Samskip says it has developed a ‘highly successful concept’ for door-to-door solutions based on intermodal loading equipment and its own complete trains. The trains can carry all kinds of containers and trailers including so-called ‘mega trailers’, three-metre high containers developed in the truck industry mainly for the transportation of parts for the car-making industry.

Mats Nyblom added: “We are pleased and proud about the extended confidence that Samskip is exhibiting in Hector. Samskip’s forward-looking environmentally friendly concept focuses on quick and reliable rail services.” Johan Logtenberg, Managing Director of Samskip Van Dieren Multimodal, said: “We are happy to take this step with Hector Rail and together develop our intermodal concept further.”

thank you very much for the information!
Is there a way I can get more info on the matter? So I can make a post on my local university about this? https://uautonoma.cl/

Thank you very much in advance!