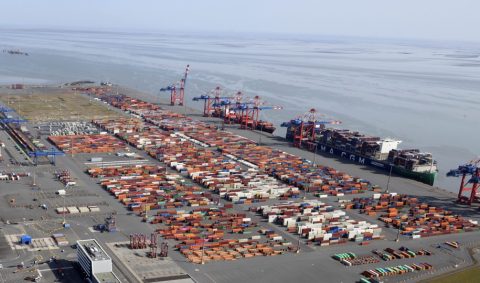 EUROGATE Intermodal GmbH (EGIM) will include Wilhelmshaven, Germany’s only deep-water port, in its combined transport network. From 16 January, the intermodal company will offer rail connections between the Container Terminal Wilhelmshaven (CTW) and Duisburg, Munich, Nuremberg and Kornwestheim.

In Q2 2023, the company aims to expand CTW’s connections to Ulm, Mannheim and Frankfurt am Main, with the target to run 13 weekly roundtrips between the port and the German hinterland by June 2023. Interested parties in the services can book their slots via railMybox, the digital platform specialised in combined transport.

Trains will run with electric traction between the CTW and key German hinterland locations. This is a crucial service component since it aligns with Wilhelmshaven’s sustainable goals, which also aims to expand its intermodal network in southern and western Germany during the coming months.

Moreover, according to EGIM, Wilhelmshaven is closely monitoring the infrastructure upgrades occurring in the German railway network to keep up with the developments and adjust its rail services or introduce new ones accordingly. Specifically, “the expansion of rail infrastructure between Wilhelmshaven and regions along the Rhine will further accelerate these developments and change the flow of cargo, as trains will be able to travel directly and efficiently to the quayside in Lower Saxony,” explained EGIM.

The development of Wilhelmshaven’s intermodal network and the future possibilities are not restricted to EGIM’s new services, though. More companies see opportunities to include the deep-water port in their networks. For instance, TX Logistik, the subsidiary of Mercitalia Group, will also integrate Wilhelmshaven into its network and start transporting hinterland traffic from mid-January 2023 to Nuremberg and Kornwestheim. The company plans to add more connections by mid-2023, just like EGIM.

As electrification remains crucial for “Sustainable Goals”, now it seems most urgent that, as well, it turns sustainable for Industry, etc.!
Currently, via one single mode, a most vulnerable overhead supply and even worse, lacking of redundancy, regrettably thus – in no respect optimal at intermodal supply chains, now claiming high quality.