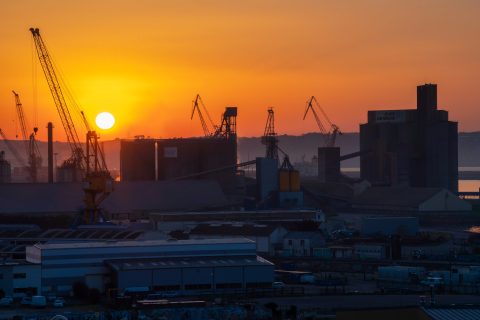 Port of Brest: rail track reused after nine years thanks to Bunge

For the first time in nine years, rail tracks in the port of Brest, northwestern France, were finally used again. Bunge, an American agribusiness and food company, has started supplying its facility in Brest by rail. Rapeseed will be transported from the Centre-Val de Loire region, in the heart of the country, as a spokesperson from Bunge told Rail Freight.com.

On Tuesday, 18 October, the first train made its entrance at the port. In total, 10 convoys carrying rapeseed are expected to enter the Bunge facility over the next five weeks, with two weekly trains scheduled. Each train will carry around 1,300 tonnes of rapeseed. The cargo unloading process is taken care of by the Brest Bretagne Port Society (SPBB), the company operating the port of Brest, which is renting a shunter specifically for these operations.

Back to the future: return to the rail

The port of Brest is not new in the rail freight game. Throughout the 1970s and ‘80s, it was handling around 100 trains every year. Rail traffic in Brest decreased significantly with the opening of the Montoir-de-Bretagne agro-food terminal at the port of Nantes-Saint Nazaire, 300 kilometres south of Brest.

Moreover, over the past years, the factory in the port of Brest in Bunge’s hands since 2017, was supplied only via sea and road. “If this experiment proves conclusive, a new wave of deliveries, consisting of 10 trains as well, could take place next January,” said the port of Brest. “Any future services will be scheduled based on business needs and we will continue to consider this means of transportation going forward,” the Bunge spokesperson added.

Last week, another rail freight service for the agro-food industry was set to be reactivated in France. Products from the south of France destined for the Rungis International Market in Paris will be soon loaded on trains in Perpignan. Rail4Logistics, a subsidiary of SNCF Fret, will be in charge of this project, financed by the EU for more than 12 million euros.