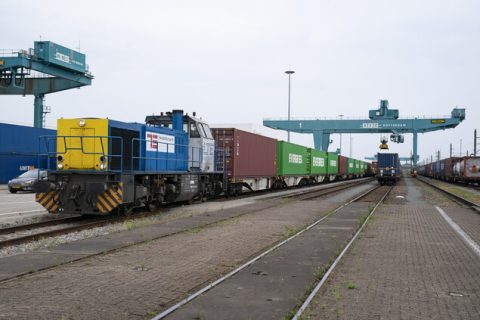 The port of Rotterdam has a new port shuttle per 30 July. Logistics operator Trimodal Europe has launched a shuttle train with a fixed timetable of 16 departures per week between the RSC terminal in the Waalhaven and three deep-sea terminals on the Maasvlakte (RWG, EMX and APM2).

All departures are from the RSC terminal and to one of the three deep-sea terminals on the Maasvlakte, explains Don van Riel, managing-director of Trimodal and initiator of what has been dubbed the Maasvlakte shuttle.

“Intermodal operators used to depart from several terminals, but regularly faced delays, which made them miss their slot. Moreover, they would book only three or four containers on a train. There was a lot to win in terms of efficiency”, van Riel said.

The Maasvlakte Shuttle bundles cargo from several operators and in this way, aims to leave the RSC terminal loaded with 108 TEUs each time, on a fixed timetable. “This is an efficiency gain for the intermodal operators, and for the deep-sea terminals.”

Apart from this, there is the situation on the roads surrounding the port of Rotterdam, said von Riel. “The accessibility of the port by road is getting less, as the roads are congested and the volumes in the port terminals are on the rise.”

Railways undertaking LTE, which is carrying out the traction, commented that the new shuttle is a commitment to the modal-shift. “With a project like this the Rotterdam port is more accessible for containers from all Europe and the congestion on the road A15 gets tackled. As a result, 90.000 TEUs is taken from the road.”

The new shuttle is not the first in the harbour. The port of Rotterdam operates the port shuttle. But the Maasvlakte shuttle should not be seen as competition, says von Riel. “It is just another service, providing a link between intermodal operators and the last mile in the harbour.”

Yes, when quality matters, as at current JIT supply chains, then just direct calls – and vice versa!
Thus accordingly, regrettably, low quality infrastructure and on shore feeding, has been part of severe congestions, now plaguing clients of ports… (Majority does not enjoy direct access to a port…)
Now, at railways, for high capacity and for high utilisation of assets, any causes of disturbances have to be outed!
(Low price track constructing has meant high, not timely LCC, etc.)