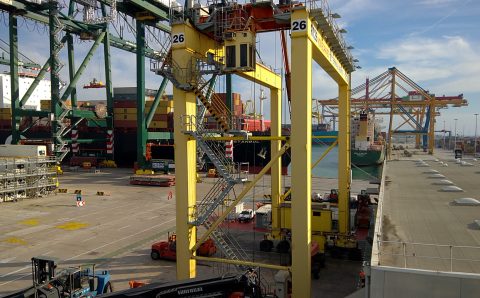 Port of Valencia has its rail game strong

The Spanish port of Valencia was awarded the REIF Shift to Regional Rail prize by the Italian Institute for Transport and Logistics (ITL). The distinction reflects the port’s success in giving a prominent position to rail freight transport in its operations. Eleven per cent of the port’s volumes are transported by rail, a percentage three times bigger than Spain’s average rail freight transport share (four per cent).

The REIF Shift to Regional Rail award aims to share best practices and provide an opportunity for communication and knowledge exchange among regions and local contexts all over the EU regarding policies to support rail and intermodal freight transport. It is financed by the EU’s Interreg Central Europe programme, incentivising companies to use more rail and align with green sustainable goals.

The port of Valencia is one of the European ports focusing heavily on rail transport. In 2021, the port handled 4,000 trains, accounting for approximately 80 per week and operated by ten different rail companies. “Goods imported or exported from Valenciaport by rail represent 11 per cent of the total traffic, a percentage that almost triples the average share of what is transported in Spain by train, which stands at 4 per cent”, explains the port authority.

“The prize reaffirms the line of action that we have been carrying out for years to promote and increase the use of trains in the port area and our hinterland”, commented Aurelio Martínez, the president of the port authority of Valencia. Indeed the port is a hub for important rail freight connections in the Iberian peninsula. For instance, it is the base for Maersk’s train carrying the goods of Ikea to its Spanish distribution centre. Moreover, its a hub for COSCO Shipping. The Chinese company operates the CSP Valencia terminal located at the port and works intensely to enhance rail connections with hinterland Spain.

But the port’s authority also has a rail investment plan. The last few years have seen the company spending up to 105,6 million euros on rail tracks construction and upgrade projects. One instance is the works on the Zaragoza-Teruel-Sagunto-Valencia line and the adaptation of tracks to accommodate 750-metres long trains. In total, including track electrification projects and intermodal transport development, the port has invested 240 million euros in its facilities and the broader region.

Currently, another terminal is under construction on the port’s northern side. After its completion, the port of Valencia will be able to handle an average of ten trains per day, boosting its rail freight volumes even more.