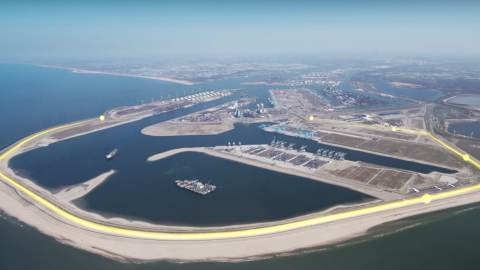 The Container Exchange Route (CER) on the Maasvlakte in the port of Rotterdam will probably not be put into operation until the end of this year. The project is delayed by about a year. The system is intended for the exchange of containers between, among others, the five large container terminals on the Maasvlakte and should increase the efficiency of the Rotterdam container business.

CEO Allard Castelein of the Port of Rotterdam Authority (Port of Rotterdam Authority) said that it will take ‘nine to twelve months’ before the 17-kilometer-long runway system can be put into use. According to him, this time is needed to connect the container terminals, with their mutually different transport systems, and other parties to the CER.

The top man made these remarks at the presentation of the financial and transhipment figures. What also became clear, is that the project has been downsized. The investment budget was reduced from 175 million to 100 million euros.

According to the market parties involved in the project, the port manager actually wanted to have all kinds of ultramodern systems installed, including for automatic vehicle recognition, but has now decided not to do this.

Investment cuts were reported earlier by our sister publication Nieuwsblad Transport. Last week, it became clear that the port manager had to write off 24.7 million euros on the CER project. The port manager stated this in an explanation of the financial figures. Six months ago, the Port Authority had already reported a setback of 5.7 million on the project, which was started in 2018.

The Port Authority had issued a worldwide tender in mid-2020 for the delivery of a hybrid transport system, in which the containers should be able to be transported both manned and unmanned. In addition, candidates not only had to supply the equipment, but also had to take care of the transport themselves. The port manager said at the time that it wanted ‘an integrated package’.

At the beginning of last year, the market turned out to be unable to supply such a concept, at least not under the conditions set by the Port Authority. That is why the port manager pulled the plug on the project in May and it was decided to write off all costs incurred.

According to chief financial officer Vivienne de Leeuw, the amount reported six months ago relates to all costs incurred for the tender process itself. According to her, the other 19 million euros has been spent on all kinds of CER-related IT projects. With the decision to drop the hybrid concept, those investments also lost their value.

The Port Authority has also investigated whether the systems to be developed can be applied in a different way, but that turned out to be unfeasible.
The Port Authority reports another major setback in the annual figures for 2021. This results from a recalculation of the tax for future years as a result of the change in the corporate tax rate. The company calls that change “larger in 2020 than in 2021”, namely 144.6 million against 33.8 million. All in all, the net result decreased last year compared to 2020 by 104.5 million euros to 247.2 million euros.