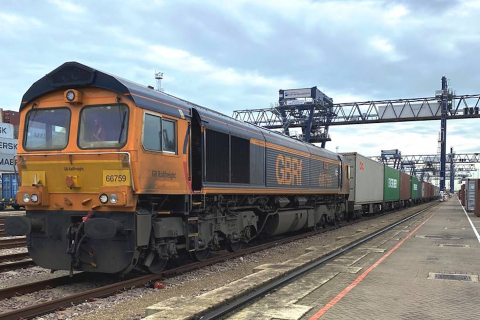 Maritime Transport, the familiar provider of integrated road and rail logistics, has launched a new intermodal service this week, connecting its Birmingham Intermodal Freight Terminal (BIFT) with Hutchison Ports Port of Felixstowe. It’s the 38th daily rail service originating at Felixstowe, Britain’s busiest intermodal port. The new service is operated by GB Railfreight for Maritime Transport and connects the port with Birch Coppice in the Midlands.

Tuesday’s departure (11 January) is the third intermodal service between the east coast port and Birmingham. Operating Tuesday to Saturday, the service boosts rail-borne capacity on the link by 40 per cent, with a total transport capacity of 87 TEU in each direction. The service is part of a programme of investment in the Birch Coppice terminal in Birmingham, where Maritime has recently installed extra container handling capacity, with more in the pipeline.

“With a shortage of more than 100,000 lorry drivers in the UK causing disruption to supply chains, Maritime’s latest service provides additional capacity to ensure goods can continue to move across Britain”, said a statement from Maritime. “Maritime has invested more than 5 million euros [4.17 million pounds] in container handling equipment at BIFT since acquiring the terminal back in 2014, delivering industry-leading turnaround times.”

“Our investment in new routes, new equipment, and our terminals enables us to provide the most advanced logistics solutions, and reflects our drive to deliver increased resource at a time when the industry is facing huge challenges”, said John Bailey, the Managing Director – Intermodal and Terminals, at Maritime Transport. “We are only at the start of a journey that will continue to see us challenge the industry norms and accelerate modal shift.”

Felixstowe, while still moving a large proportion of traffic onwards by road, is in the midst of a shift to rail itself. “Increasing the proportion of traffic moving by rail is an important part of our strategy to offer the widest possible range of sustainable transport options through the Port of Felixstowe”, said Robert Ashton, their Operations Director. “We are keen to work with partners, including GB Railfreight and Maritime Transport, to help others remove carbon from their supply chains. With three dedicated rail terminals at the port we offer more rail services to more inland destinations with greater frequency than any other UK port.”

Most major passenger terminals would envy the list of significant destinations connected to Felixstowe. Among them direct service run to northern UK terminals in Scotland, Manchester, Liverpool, Leeds, and Teesport. In the Midlands, several Birmingham terminals, iPort Doncaster and East Midlands Gateway are all currently served. Trains also run to Cardiff in Wales. The port continues to figure in calls for the branch line accessing the terminals to be upgraded to double track as past of a larger regional improvement scheme.

Maritime has a long standing partnership with GBRf. “We are delighted to be expanding our relationship with Maritime with this new service”, said John Smith, Managing Director, GB Railfreight. “The shift to rail freight has a fundamental part to play in tackling carbon emissions and climate change, and it’s great to see businesses choosing rail as a greener alternative, without compromising on operational efficiency and reliability.”

Felixstowe, which recently successfully applied for freeport status under a UK government scheme, has been at the front line of the supply chain crunch, with containers stacking up on the quayside and delays in moving stock off the port. However the owners, Hutchison Ports, have been making strenuous efforts to relieve congestion. As part of that effort, and representing its commitment to reducing carbon, Felixstowe recently placed an order for 48 battery-powered terminal tractors and 17 zero-emission remote controlled electric rubber-tyred gantry cranes.