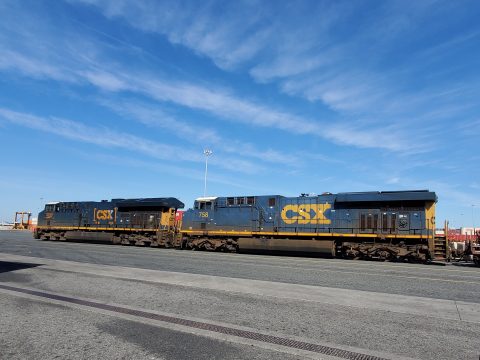 APM Terminals Elizabeth in New Jersey, USA, is looking to use its first port of call momentum to expand intermodal cargo volumes to and from the Midwest and Canada. Using a direct-to-rail landing zone section on the terminal during vessel discharge operations, APM Terminals Elizabeth is able to expedite rail cargo to its near dock rail facility twelve hours after discharge.

Jon Poelma, Managing Director of APM Terminals Elizabeth said: “Our rail service has been very stable and consistent – thanks to our Longshore Labor partners doing a fantastic job with productivity and availability. Rail carriers are benefitting from the strong import and export market as they see their intermodal cargo volumes continue to grow. Locomotive and railcar availability throughout the pandemic has been steady and reliable.”

“The coordination between our marine terminal operators, Class 1 railroad partners and Conrail has kept our ExpressRail system fluid and efficient during the record-breaking cargo surge facing ports nationwide, giving us the ability to flex cargo capacity whenever the need arises. Our close collaboration with port stakeholders such as APM Terminals and the waterfront workforce has been key to the success of the port during a historic moment at the port made only more challenging by the overlay of the global COVID-19 pandemic.”