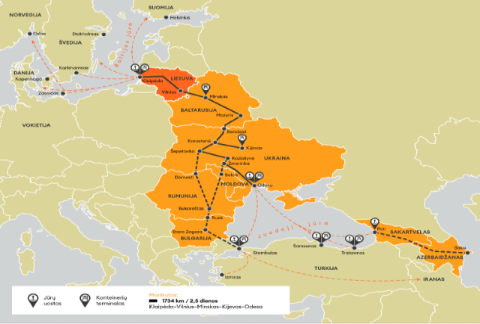 Black Sea-Baltic corridor: Lithuania and Turkey one step from realising it

The Lithuanian and Turkish railways are very close to sealing a collaboration to transport semi-trailers between the two countries. The aim is to utilise existing services and link Istanbul to Chernomorsk in Ukraine and further to the port of Klaipeda and Scandinavia.

A delegation of the Lithuanian Railways visited Turkey a few days ago and met with the team of the Turkish Railways. The two parties discussed the possibility of launching a new short-sea and rail connection that will function as a Black Sea to the Baltic corridor. They also inspected the Haydarpaşa Port in Istanbul, which will possibly serve as Turkey’s gateway to Ukraine.

The background for an intermodal connection linking Turkey with Lithuania via Ukraine is already there. Two rail freight services already run between Lithuania and Ukraine. One is the Baltic-Ukraine shuttle train running once per week between the port of Klaipeda and the port of Odesa via Kyiv.

The other option is the Viking Train. This train service is already ten years old since it commenced before 2010. It also links the ports of Klaipeda and Odesa, making intermediate stops in important destinations in Lithuania, Belarus and Ukraine. Some of them include Vilnius, Minsk and Kyiv.

Lithuanian Railways intend to build on the existing resources. That being said, they aim to use the existing Viking Train connection and extend it even more. Laurynas Bučalis, head of international relations in Lithuanian Railways, explained that the partners want to extend the Viking Train service to the port of Chernomorsk next to Odesa, which will become the entry point of Turkish cargo in Ukraine.

The service will entirely run on rail tracks between Chernomorsk and Klaipeda. Bučalis mentioned that the two parties’ plans foresee a frequent and stable service with two roundtrips per week. Each train will be full, carrying 43 semi-trailers. Estimations show that in total, 4,472 semi-trailers will be transported yearly in this route.

From Klaipeda to Scandinavia

The main cargo flows that the new intermodal service aims to attract do not only focus on Lithuania. In fact, the Baltic country and the port of Klaipeda will function as the crossroad for cargo to reach other destinations. Bučalis underlined that the goal is to establish a Sweden-Turkey intermodal corridor with the train service Chernomorsk-Klaipeda facilitating the traffic.

“From Klaipeda, there will be short-sea connections to Scandinavia, but also northern Europe,” he said. Specifically, ferry connections will transport cargo to Trelleborg and Karlshamn in Sweden, Fredericia in Denmark and Kiel in Germany.

On its behalf, Lithuania is ready to handle more intermodal volumes through its territory. Since September 2020, Lithuanian Railways have been testing trains carrying semi-trailers in the route between Vilnius and Klaipeda. Moreover, since May 2021, the intermodal service between the two destinations has been available to the market. Lithuanian Railways use the ISU system and cranes to load semi-trailers on wagons, while the latest tests with state of the art equipment were carried out last November.