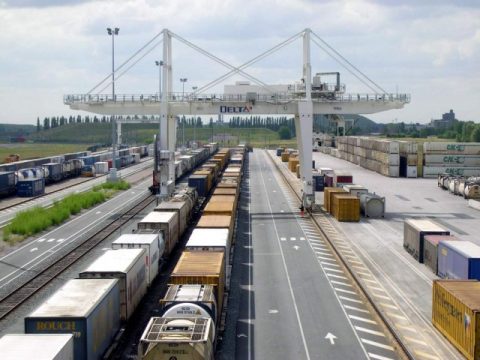 France has a new P400 rail connection. After Perpignan-Paris, the line Vénissieux-Dourges was opened for this type of trailer, which is traditionally moved by road. It means another step forward for rail freight in France.

On Tuesday 5 October, the first train departed from the French city of Vénissieux in the south east, headed for Dourge in the north of France. It is operated by Novatrans and Greenmodal, which thanked SNCF Reseau and SNCF Fret for their cooperation. “Finally, the first of a long series of trains departed”, Novatrans wrote.

France has a relatively complicated bureaucratic system when it comes to utilising P400 trailer trains. The Perpignan-Paris service, which was launched in April this year, was only the first P400 service in France. However, Novatrans has the ambition to build a strong French P400 network, providing links between other destinations. “We aim to create a real alternative to road, offering a flexible and easy access rail service for the carrier with a P400 requirement”, the company said earlier.

According to Hupac, which strongly supports the development, there is still a lot of work left to do in convincing the French government to create better bureaucratic and infrastructural prescriptions. This was pointed out by Alessandro Valenti, Director Sales and Operations at Hupac pointed at RailFreight Live earlier.

“Governments seem to back other existing markets in semi-trailer transportation. For instance, France’s non-cranable trailers sector has a significant portion of the transport market’s share. The French government does not wish to jeopardise the financial stability offered by this situation, said Valenti. Consequently, in this case, the stake is to communicate and promote P400 trailers to markets that still stick to traditional yet not so green modes of transport”, he said.