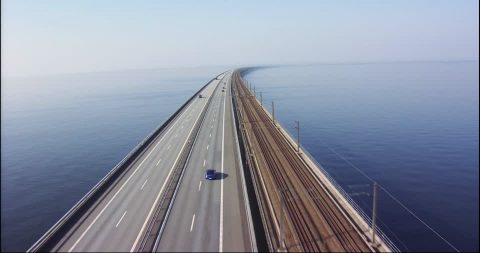 Intermodal traffic to Sweden is picking up again, as more and more companies are finding the possibility to pass the Danish Great Belt Bridge. Trains with pocket wagons were banned on this bridge for a long time. The ban was lifted on 20 April, but with strict requirements for the passage of intermodal trains.

Skanerail, the intermodal service between Coevorden in the Netherlands to Sweden, resumed services including pocket wagons with trailers on Monday 5 July. The same was announced by intermodal operator Hupac. “Finally, our trains are running again”, the company said on Monday.

That morning, the first train from Busto Arsizio arrived in Taulov terminal in the south of Denmark, to resume to its Scandinavian destination. “After months of traffic bans on the Danish network, a technical solution was found to ensure additional safety for the circulation of semi-trailers”, the company said.

On 20 April, the Danish authorities announced a set of temporary measures that would enable transport of semi-trailers in pocket wagons again. These measures are in place until a more specific regulatory framework applies to guarantee the safe transport of trailers by rail.

The measures include a list of procedures and conditions that should ensure that the trailer cannot move or get loose from the pocket wagon. For example, the type of hitch used by the semi-trailers must withstand vertical forces greater than or equal to 85 kiloNewtons.

The measures followed a country-wide ban of pocketwagons with semi-trailers for a period of four months. The pocket wagon ban initially started from Denmark’s Great Belt Bridge after a safety incident on 13 January involving one of DB Cargo’s trains. Then, around 27 January, it applied to the country’s whole since investigations concerning the incident’s cause had not been concluded.

The ban has hit the industry hard. Companies like Hupac, DB Cargo Scandinavia, Skanerail and Hector Rail have all lost considerable volumes, as the alternatives that were available were not very feasible. Since 20 April, volumes are gradually returning back to normal. Samskip Multimodal and traction partner Hector Rail successfully restarted trailer traffic through Denmark at the end of May, with the first train departing from Duisburg in Germany to Sweden. With the Skanerail service on track, the Great Belt Bridge route is starting to look like what it was in 2020.