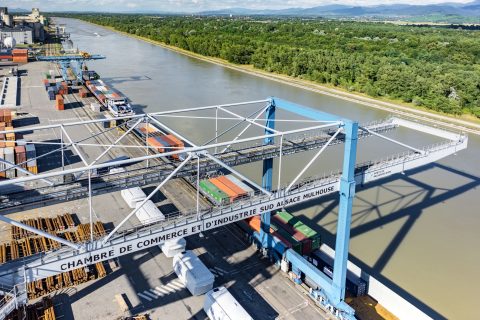 As of 1 July, Swissterminal AG officially undertook the operation of three French inland ports. The Alsatian ports of Ottmarheim, Huningue and lle Napoleon are into one company, the Alsaceteam, operated by Alsaceterminal SAS, a subsidiary of Swissterminals.

Swissterminals announced at the beginning of the year that they acquired the ports’ operations through an international tender. With this move, Swissterminal and its partners want to improve transport connections within Europe for the forwarding industry on the border triangle region.

It plans to establish new rail connections with Le Havre and Marseille-Fos, which are the two main French seaports, and also part of the Alsaceteam company. In this way, it is broadening transport options for numerous industries in the region, such as chemicals, metals, food processing and construction.

“The start of operations in France is incredibly exciting for all of us in the company. We are very much looking forward to building a bigger and stronger organisation and accelerating logistics activities in France and the tri-border area”, commented Roman Mayer, CEO of the Swissterminal Group.

Ottmarsheim, located on the Rhine river 15 km northeast of Mulhouse, is the largest of the three ports. The annual capacity is currently approximately 200,000 TEUs. This is a trimodal container terminal (rail/barge/truck) with a direct rail connection on its premise. With the new operator, the port will have direct rail connections to Le Havre and Marseille as well as links via Birsfelden (Switzerland) to Genoa (Italy) and China.

The current bulk-goods port in Huningue, also located on the Rhine river and about 35 km southeast of Mulhouse, will be developed into a trimodal transhipment centre (rail/barge/truck) for container traffic with Switzerland by 2025. The terminal directly borders Basel (Switzerland), and Weil am Rhein (Germany). The goal is to achieve an annual capacity of more than 100,00 TEU. Huningue-Village-Neuf will replace Swissterminal’s existing container handling facilities in Basel-Kleinhueningen.

The third port site in the Ile Napoléon industrial zone is just outside Mulhouse city limits on the Rhine-Rhône Canal. It will continue to serve for conventional cargo handling of bulk goods and fuels.