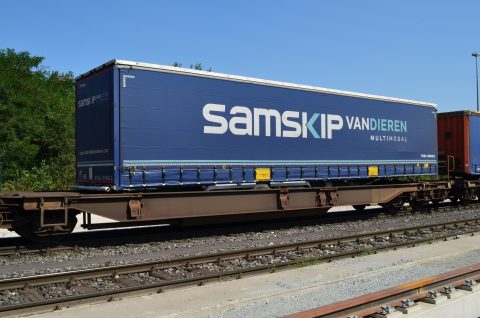 Samskip Multimodal and traction partner Hector Rail successfully restarted trailer traffic through Denmark this week. On Monday 31 May, the first train departed from Duisburg in Germany to Sweden, with containers as well as trailers. Shipment of trailers through Denmark had been banned for much of this year. This is one of the first intermodal services through Denmark to resume.

On 20 April, the Danish Civil Aviation and Railway Authority lifted the ban for the transportation of pocket wagons on semi-trailers in Denmark, under very particular conditions and for limited capacity. Among others, it enabled Samskip and Hector Rail to resume its various rail shuttles between Germany and the Scandinavian countries.

“Just this week the first trains departed successfully with trailers via Denmark after all partners implemented the modified procedures for safe trailer transport by rail respecting the criteria from the Danish authorities in their rail supply chain”, the operator commented. Samskip keeps the current rerouting routes in place to serve all customers until all applicable volumes can be shifted back to the rail set up via Denmark.

“We are very happy with this decision and trust of the Danish authorities to give Samskip approval to increase our rail services through Denmark”, says Johan Grootkarzijn, head of rail network at Samskip.Also Hector Rail expressed its gratitude: “We are glad and proud to be the first train operator to recommence the train traffic with trailers through Denmark together with our partner Samskip Multimodal”, commented Anders Bellander, commercial director of the railway undertaking.

Due to the trailer ban, Samskip has witnessed decreasing rail haulage activity between the companies’ rail terminal in Duisburg and the Northern European markets through Denmark. Although regular containers could still be transported, the trains were not completely full. Moreover, re-routings were established to move trailers to and from Sweden regardless.

The pocket wagon ban initially started on Denmark’s Great Belt Bridge after a safety incident on 13 January involving one of DB Cargo’s trains. Then, around 27 January, it applied to the country’s whole since investigations concerning the incident’s cause had not been concluded. Companies like Hupac, DB Cargo Scandinavia and Hector Rail immediately expressed their concerns over the impact that such a move could have business-wise.

The measures announced by the Danish authorities on 20 April are temporary, until a more specific regulatory framework applies to guarantee the safe transport of trailers by rail. The measures include a list of procedures and conditions that should ensure that the trailer cannot move or get loose from the pocket wagon. For example, the type of hitch used by the semi-trailers must withstand vertical forces greater than or equal to 85 kiloNewtons.

In general, these conditions are considered as strict and difficult to comply with, resulting in a continued limitation for the intermodal industry. According to many industry players, the transportation of trailers by rail is already safe, and the incidents on the Great Belt Bridge are an exception.