PCC Intermodal has increased its regular service via Poland to Belarus. The interest in this service is huge, the company says. If all goes well , it may be able to increase the connectivity on this corridor up to 5 weekly services as soon as next year. The service directly connects Kutno and Brest. Recently decreasing rates on the Japan/Korea route is one of the factors that makes it worth developing fast.

The political instability in Belarus is not affecting the volumes moving back and forth by train. The supposed border closure is not affecting rail freight at the moment; trains are running as usual. This was confirmed by the intermodal operator. In fact, if all goes according to plan, the service will be increased to five times per week by the end of the next year. 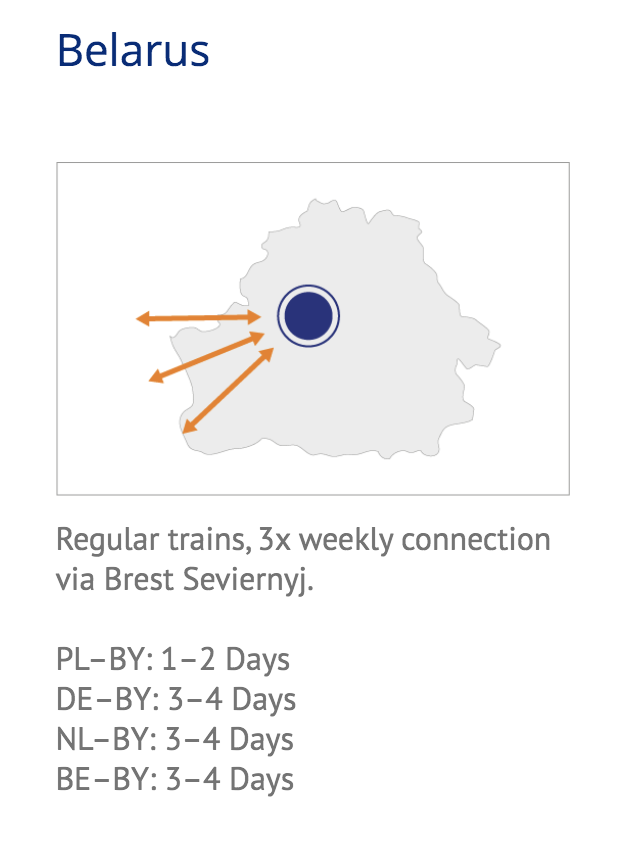 PCC Intermodal launched its regular service to Brest in 2014. “We started slowly with once per week, and increased this to twice per week in 2017. After three next years, we were able to add an additional regular service. In all those years, we have gained a lot of experience and know-how, in terms of documentation and customs procedures

The Poland-Belarus services is not the easiest one to operate, explains Monika Konsor-Fąferek, Development Director of PCC Intermodal. “Unfortunately, we face temporary congestion problems and the rules for rail transport in the east are quite different to what we know from our experience in the west. This is a challenging route, but at the same time full of life.”

Connecting Poland with the east is not the only activity of the operator. It has an extensive network, which can be divided by regular intermodal connections via Polish inland terminals to sea ports (in Poland, Netherlands, Germany and Belgium), and other lines linking logistics hubs in Europe. In addition, it offers connections to destinations in the east, such as Central Asia, China, Korea and Japan. Ukraine was recently added as well.

It is the connection to the Far East that is recently stimulating cargo flows from Brest to Europe. “For some time already, we have been running a multimodal solution to/from Japan and South Korea. We do this together with our Russian partners. For this service, we connect Vladivostok through the Trans-Siberian route via Brest with our European intermodal network.

“This connection was launched successfully last year, and now is becoming more and more attractive to the market. A recent drop of the rates on that line gave a new push to the service and made it available for a larger market”, says Konsor-Fąferek.

It’s a kind of must

However, increasing the frequency of regular railway connections is in the DNA of an intermodal freight operator, the company explains. “It is a strategy we develop in all corridors. It is a kind of must for the connectivity to last longer than just a trial, and to stay attractive to the market.

“Despite all the congestion and infrastructural problems, we aim to stay efficient and flexible for our clients. We need to face market expectations regarding transit time and cannot stop now, when already so much cargo has been shifted from road to rail on the long distance.”

PCC Intermodal also runs a weekly service to Ukraine, which is an alternative gateway to Europe for traffic from the Far East. But this is still in its infancy, PCC Intermodal says. “The corridor is very attractive for international trade and rail transport, but still a lot remains to be done before we make this a regular service and increase the frequency on that route. So far, we have not run up till Kiev or Lviv yet, not even mentioning Odessa. But, that seems to be a natural step ahead. Currently our trains deliver cargo to Mosciska at the Polish-Ukrainian border, we go directly from Poland, the routing is provided parallel to the Brest solution”, the Development Director explains.

However, also on this route the company foresees a regular frequent connection. It is currently discussing the option of adding some of the main cities of the country to its network. “For sure, once weekly is not enough. We hope that, if not this year, at the latest beginning of next year we can increase this service to a minimum of twice per week to Moscicka, with further rail distribution to Ukrainian hubs. We keep working on that.”