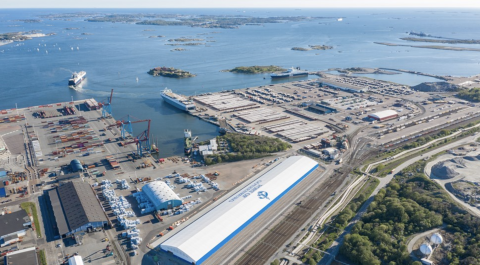 New ‘under cover’ terminal for forest products in Sweden

A completely new transshipment terminal, located between the Port of Gothenburg container and ro-ro terminals, is gradually emerging. The terminal will receive incoming forest products by rail from Swedish mills and then transfer the products to containers for onward transport to various parts of the world. The terminal is due to become operational in this fall.

The terminal includes a 360-metre long, 60-metre wide tent, which was erected at the Svea Terminal a couple of weeks ago. The terminal, named the Svea Terminal, will offer 45,000 square metres of storage space. Around half the area, 21,600 square metres, is covered by the world’s largest storage tent, which was recently erected. Volumes equivalent to 60,000-100,000 twenty-foot-equivalent units will be handled at the terminal each year.

‘Not a camping tent’

On the inside, the goods can be loaded into weather-protected containers and the area will be used partly for intermediate storage. The tent measures 360 metres by 60 metres and is up to 15 metres in height. The steel beams that support the tent weigh 450 tonnes.

“It’s not exactly a camping tent, but rather a fully equipped storage facility that meets all our demands and specifications, and at the same time offers a cost-effective operating solution,” said Arvid Guthed, Vice President Port Development, Gothenburg Port Authority.

The terminal has rail connections and can house a 350-metre train. By doing so, sensitive products such as pulp and paper rolls can be transported directly into the facility by rail, where under cover they are transferred into a container before being loaded on board the ship.

Investments include the current expansion of the double-track Port Line and construction of the Arken Combi Terminal, which has already led to a substantial reduction in road traffic in Gothenburg. A further investment is APM Terminals’ modernisation and capacity expansion on its marshalling line, where trains are loaded and unloaded inside the container terminal.

The Port of Gothenburg wanst to reduce the whole of the port’s carbon emissions by 70 per cent through to 2030. One of the ways of achieving this goal is to continue investing offensively in the Railport concept in an effort to increase the proportion of rail-borne freight even further.

“The Svea Terminal is ideally suited to realising this ambition. The terminal will increase rail capacity even further and we will be able to double forest product volumes arriving at the port by rail. It also means that we can reduce the port’s climate footprint and provide further conditions that will allow our customers to make climate-smart choices”, said Claes Sundmark.

When it comes to operating the terminal, a highly proficient company with many years’ experience of transshipment at the Port of Gothenburg has taken on the task.

“With our experience and the good preconditions at the terminal to facilitate effective crossdocking and transshipment of overseas freight, the terminal will be a major asset for the port and the Swedish forest industry,” said Mikael Bergman, MIMAB chief executive.