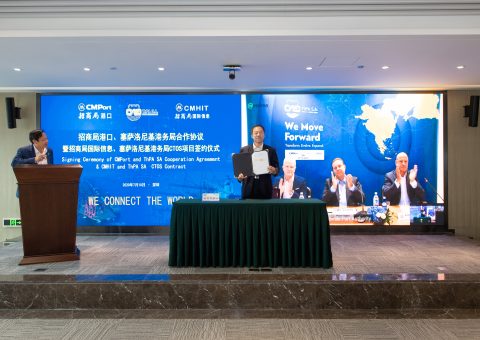 Chinese invest in other Greek port, this time Thessaloniki

Published on 14-07-2020 at 10:28
Signing ceremony in Shenzhen From left to right: Deputy Manager of CMPort, Li Yubin, Managing Director of CMPort, Dr.Bai Jingtao

Thessaloniki Port Authority has signed a cooperation agreement with China Merchants Port Holdings and its subsidiaries China Merchants Holdings (International) Information Technology. The parties will collaborate when it comes to the Container Terminal Operating System of the Greek port.

Thessaloniki Port Authority (ThPA) and China Merchants Port Holdings (CMPort) have agreed to do what is needed, commercially and operationally, in order to promote the Port of Thessaloniki in the Chinese market as a gateway to Europe. The port is Greece’s second largest, after the main seaport of Piraeus. China’s shipping firm Cosco has a majority stake in the latter.

Although the port of Thessaloniki is the second largest, it is an important gateway port to the Balkan region already. It is much closer to the hinterland, and the direct railway link to the Macedonian city Skopje is part of a network that connects the broader region, including the countries of Bulgaria, North Macedonia, Serbia and Romania.

Managing Director of CMPort Bai Jingtao, commented: “The port of Thessaloniki has a long history, outstanding location and shipping advantages. It is not only the main import and export gateway in northern Greece, but also an important channel and logistics hub linking Europe and Asia. We believe that this successful cooperation is not limited to a system marching overseas in Europe, but also a promotion of the two parties in the port areas of Europe and Asia, which can be recognised another success and practice of the initiative of Belt and Road”.

The cooperation will result in the expansion of the container terminal, which was already included in the investment plan of the port authority. “This will allow to serve main liner container services and accommodate Ultra Large Container Vessels of 24,000 TEUs capacity. We believe that the implementation of CTOS will provide additional value to our investments and support significantly the transformation of container terminal to international standards”, said Managing Director and Chief Executive Officer Franco Nicola Cupolo.

Thanos Liagkos, Executive Chairman of the port authority added: “The signing of cooperation agreement with CMPort marks a major step forward for Thessaloniki Port Authority because this cooperation fully supports us achieving the promise of developing innovative strategies and sustainable operations, with multiple benefits for the Greek economy and the supply.”