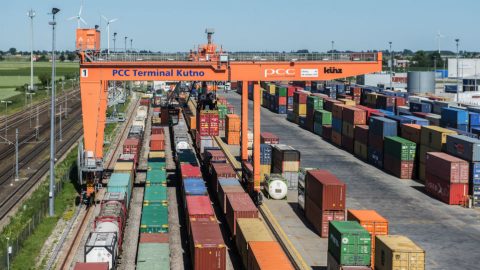 Despite the impressive growth of Polish ports on the Baltic Sea, the German port of Hamburg remains an significant rail freight destination for the important economic regions of Poland. This is the conclusion of PCC Intermodal, which celebrates the 10th anniversary of its Hamburg office this month.

In the past ten years, the intermodal operator organised 4,500 intermodal trains and delivered almost 200,000 containers running between the largest German port and various regions in Poland. “We started slowly, with four regular trains per week. Last year, we operated five regular trains, and this year we are able to move up to six”, said Monika Konsor-Fąferek.

“Hamburg port was always a very important economic location for Poland. Although the Polish ports have boomed in the last decade, Hamburg remained a very important trade point on our transport map”, said Konsor-Fąferek, marketing and development manager at the company. “PCC Intermodal’s aim is to stay stable with the daily deliveries to and from Hamburg, in connection with all the Polish economic regions and further east.”

But the potential of this connection has also not gone unnoticed by Chinese entrepreneurs, who have made effective use of the opportunity to facilitate their deliveries to many regions in Europe. At the moment, there are two regular trains per week delivering containers from Hamburg to Belarus, Russia, Mongolia, Kazakhstan, Uzbekistan etc.

The trains of PCC Intermodal to or from Hamburg are organised via Frankfurt Oder Terminal, which has became a permanent gateway for the company. “This ensures that we can offer a reliable and stable service”, said Monika Konsor-Fąferek.

In the Hamburg office itself, six people are on the job to coordinate all traffic flows of PCC Intermodal. This staff is in close contact with the Port Authorities, local clients and company partners. The head office of the intermodal operator is in Gdynia, Poland.