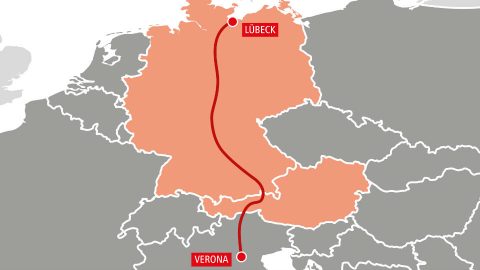 Rail Cargo Group has launched a new connection Verona-Lübeck, connecting the Northern Italian area with the Hanseatic city and the Eastern European Central Region. As the largest German Baltic Sea port, the Port of Lübeck is a central transloading hub that links the economic centres of Western, Central and Eastern Europe with the rapidly developing Baltic Sea region.

The new service runs twice per week in both directions and link to the wider network of the Austrian rail freight operator. According to Rail Cargo Group, 98 per cent of the shipments that are transported via Lübeck come from Eastern Europe and Scandinavia or are destined for these markets.

The route runs via Austria, avoiding the congested Brenner axis via Switzerland. The company states to make “a positive impact on curbing the vicious cycle of transit traffic that burdens the Brenner route”. The train carries tarpaulin and refrigerated trailers, containers as well as tank containers all by rail, also relieving Austria of the 6,144 truck journeys along this route.

In addition to the train connection, ferry routes frequently run to and from Lübeck. Thus, the combined transport options between Italy and Northern Germany have increased. “This train route provides our customers with attractive transport timetables to and from the Port of Lübeck on the Baltic Sea, and runs on our own traction from start to finish.”