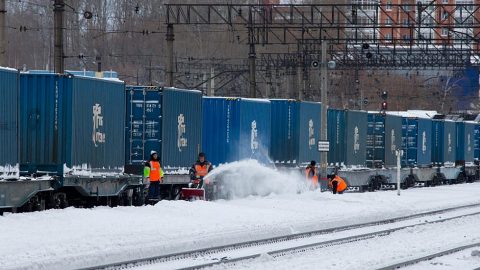 A fleet of forty ice-resistant ships, four renovated airports, new ports and rail links. The ambitions in the Russian fifteen-year plan to tackle the infrastructure in and around the Arctic route are sky high.

They have been in the pipeline for a while, but just before the start of the new decade, Prime Minister Dmitry Medvedev signed the development plan for the Northern Sea Route for the next 15 years. The online newspaper The Barents Observer reports this.

The plan includes no fewer than 84 points to be completed by 2035: from the development of the necessary infrastructure and the construction of new ships to the mapping of natural resources and the launch of new satellites and meteorological equipment.

Among other things, the Russians want to develop a permanent shipping connection via the Arctic waters north of Siberia as quickly as possible. In 2018, about 20.2 million tonnes of freight were transported via the polar route, largely Russian oil and gas. The Kremlin strives to increase the volume of freight via this route to eighty million tonnes in 2024.

State company Rosatom is closely involved in the creation and implementation of these plans. The nuclear conglomerate of around three hundred companies and 250,000 employees sees the polar route between Beringstraat and the North Sea as an alternative to the route between East Asia and Europe via the Suez Canal. The company wants to invest, among other things, seven billion dollars in financing in new ice-resistant container ships and port facilities on the so-called Northeast Passage.

Salient detail: President Vladimir Putin is the founder of Rosatom. In 2007, he signed the law abolishing the then federal atomic agency, after which all activities and possessions were transferred to Rosatom. Other companies that contribute to the plans include oil and gas giant Novatek, Gazprom Neft, Rosneft and the Independent Oil Company.

In order to meet the targets for the Polar Route plan, the Russian government and the companies involved must work hard. A number of important issues are already on the agenda for this year.

For example, there must be an agreement in April for a regional geological research programme. Major decisions must be made in June on the development of a railway line to the sea port and LNG terminal of Sabetta, located on the Siberian peninsula of Yamal in northern Russia.

The development of railway links must also be tackled in the coming years. Around December 2022, the Russian government must have a schedule for the Belkomur railway between the port of Arkhangelsk and Perm, a major industrial city and inland port, about 1100 kilometers east of Moscow.

The same period should also make clear when the construction commences of the railway line of Sosnogorsk, a city in the middle of the Russian autonomous republic of Komi, and Indiga, where construction of a new deep sea port will start at the beginning of 2020.

Mid 2024 there must be a design for the Salekhard railway line, linking the headquarters of gas company Novatek, across the river Ob with the end station of Novey Urengoy. A number of Gazprom subsidiaries are located in northern West Siberia: Urggojgazprom and Jamburggazdobytsja, which together hold 74 per cent of all Russian gas.

The most important dredging works on the Ob River, which must ensure the proper transit of large ships in the area, must be completed in December 2021. The Murmansk Transport Hub, a project with a new 46-kilometer railway and port facilities on the western shores of the Bay of Kola, is to be completed that same month.

The Russian government estimates that over the next fifteen years no less than 216 billion euros will be invested in the development of the Russian polar region by, among other things, providing substantial tax incentives to offshore oil projects, LNG producers, the petrochemical industry and companies involved in the extraction of minerals.