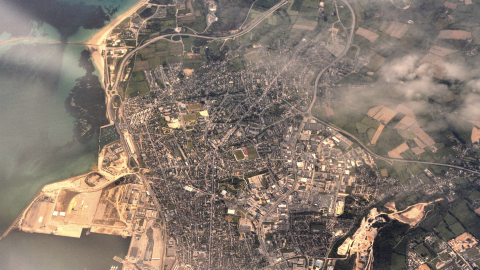 New terminal in Cherbourg should shift Channel traffic to rail

Ports of Normandy wants to establish a combined transport terminal in the port of Cherbourg, in order to increase its importance as a cross-Channel port. Especially with the Brexit in sight, the French gateway feels it should do more to facilitate smooth traffic flow. With the new terminal, it wants to shift trailer traffic destined for France and neighboring countries onto rail.

With a Call for Expression of Interests (CEI), the Port of Normandy is inviting interested companies to submit their project proposals. It wants to set up a terminal that can handle all types of trailers, and a rail system that enables transport of these trailers to the national railway network. The submission deadline is 13 January 2020 at 12pm.

Ports of Normandy is thus considering adding a rail terminal designed specifically for a railway system that could transport trailers from all over France or its neighbouring countries, particularly from Southwest France or Spain. “The rail system would need to be able to carry all types of trailers, including semi-trailers with a height of 4 metres, and be operational within two years”, the port authority explains.

The terminal should be based on a loading system with trailer gauges that meet railway tunnel specifications, which is a challenge in France and the Iberian Peninsula. Here, the specifications are different from the rest of Europe. Moreover, the terminal should facilitate non-cranable trailers, which make up most of the current trailer fleets. For this a specific loading technique is required.

From Ro-Ro to rail

The port of Cherbourg is dominated by cross-Channel traffic to and from the UK and Ireland. The movement of freight between the Uk or ireland and France is continuously growing, and characterised by roll-on, roll-off traffic. Here, trucks ‘roll from the road, onto the vessel’ in order to optimise efficiency.

Ports of Normandy is actively looking for alternative ways to optimise port operations. “The terminal would create opportunities for a more consolidated cross-Channel development, which would exploit the harbour capacity of Cherbourg. This is especially relevant with the coming Brexit, when addition customs checks will create additional stops in the port.The shift of Ro-Ro traffic to rail would also help reduce air pollution, ease congestion on roads and improve road safety. The aim is to have a more balanced modal split”, the port authority says.

But it is not only a question of building a terminal, underlines Laurent Nativelle of the Ports of Normandy. The port of Cherbourg will have to be integrated into a network of terminals and be part of the rail network in north-west Europe. “The prospect of increasing the number of rail terminals in Europe capable of loading trailers would open up the possibility of diversifying and extending the hinterland of shipping lines and ports, including Cherbourg. It would thus offer a significant alternative for the transport of trailers on a European scale. ”

The Iberian Peninsula is one of the main target markets both for Uk and ireland. It is the beating heart of Port of Normandy’s hinterland, where most of the freight travelling between Spain and the rest of Europe is transported by road. The corridor to and from the Iberian Peninsula has seen substantial and continuous growth in traffic. On the RN10 (Bordeaux-Tours) trunk road, goods traffic has increased by 240 per cent in the last 10 years, with a large proportion of foreign lorries.

The port already has a rail link with Cherbourg railway station, by which it is connected to the national rail network of France.The rail terminal would be at the heart of the cross-Channel terminal and cover a surface area of about 2.5 hectares. It would be entirely fenced off and be able to welcome an entire 700- metre-long train. The terminal would be located next to the Ro-Ro facility.

Ports of Normandy was created on 1 January 2019. It is the Port authority and owner of the ports of Caen-Ouistreham, Cherbourg and Dieppe. Ports of Normandy manages and develops port infrastructure, chooses port contractors, directs the development policies of the ports, and guarantees the security of maritime access.

The three ports – Caen-Ouistreham, Cherbourg and Dieppe – share a similar business structure, in which cross-Channel shipping (freight and passenger) predominate. In addition to this, the ports benefit from business activities linked to conventional freight, fishing, leisure, nautical and shipbuilding industries, and various other industries