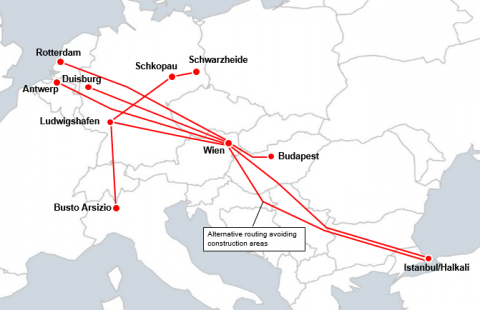 To Turkey from Europe: faster and more often

Hupac has established a new link between Turkey and Western Europe by adding a rail route from Vienna to Istanbul. With this connection, the operator has realised a faster and more reliable service across the continent. The new line is being launched this month.

Two round trips will eventually be organised between Istanbul/Halkali in Turkey and Vienna, capital of Austria. From here, frequent connections are available to the ports of Rotterdam and Antwerp, as well as Duisburg and Ludwigshafen. Hupac also operates connections between Vienna and Budapest. The service is available for containers and swap bodies.

The operator promises increased reliability due to the fact that it uses an alternative route, avoiding the main construction areas in Serbia. The transit time Vienna-Istanbul/Halkali is four days. Train journeys from the Turkish city to Rotterdam take seven to eight days, and to Antwerp six to seven days.

Hupac has also announced the launch of a new rail freight line between Perpignan (France) and Cologne (Germany). This service will start on 13 January 2020. The five-weekly service will allow non-stop gateway connections from Spain/south-east France to Sweden and further Scandinavian destinations, Hupac noted.