Hupac has expanded its rail freight service between Duisport in Germany and Gadki and Prusków in Poland. In addition to the Duisburg D3T terminal, trains to and from Poland now also call on the Duisburg DIT terminal. The new service starts today, 8 March 2019.

While the newly added terminal will handle containers and tank containers on this route, Duisburg D3T will now serve trailer trains. In this way, the operators want to offer an improved intermodal service, Hupac noted. The rail service is provided in cooperation with Metrans Rail.

This month the service from both terminals runs twice a week in both directions, but this will be increased to three times a week starting from next month. Eastbound the train leaves on Fridays and Wednesdays, while it runs westbound on Thursdays and Tuesdays. In April, this will be expanded with Mondays for eastbound trains and Sundays for trains in western direction.

The intermodal service includes direct train-to-train transhipment from and to Rotterdam and Antwerp at Duisburg DIT terminal and reliable rail service and traction in cooperation with Metrans Rail. In addition, interoperable locomotives are used to ensure quick border crossing, the intermodal operator Hupac said. 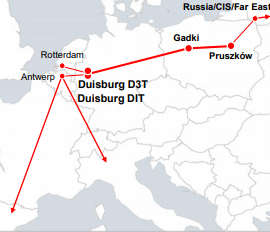