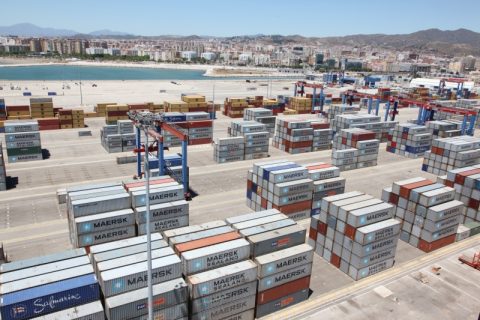 Port operator Noatum Logistics has launched a rail freight service in the Port of Malaga to load ships to Montreal (Canada) and the Great Lakes area (US and Canada). The train departs from Malaga and is the successor of a similar line that was closed five years ago.

The first train transported 24 containers with a total capacity of 40 TEUs, transporting technology and manufacturing goods. It was 450-metre in length. Goods are to be loaded in the Hapag Lloyd-owned ship Mississauga Express, which connects the French port of Fos-Sur-Mer with Canada, stopping in Malaga and Tangier. The German sea shipping company is to offer a weekly connection via these ports.

This rail freight service is a bet on the development of the Spanish Mediterranean corridor to link the entire coast with France via rail. “This new service is an expression of confidence in the port, which must be an important hub in the straits of Gibraltar. Rail freight transport is essential for this goal”, the chief officer of Noatum, Antonio Campoy noted.

The Port of Malaga authority is developing a marketing campaign to increase the number of companies using this rail freight service and propel its role as a gate to the Mediterranean hinterland. The port handled 1.15 million tonnes and 54,000 TEUs in 2017.