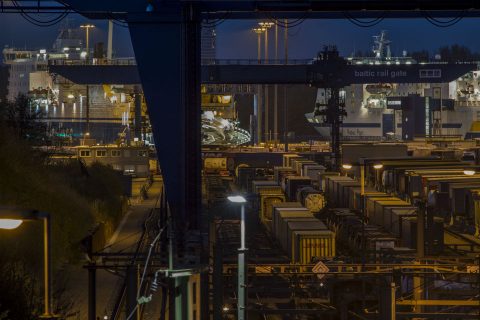 European Cargo Logistics (ECL) and DSV Road AB have jointly launched a new rail connection between the German terminal of Travemünde and the Czech freight station of Zajeci. Travemünde is part of coastal city of Lübeck on the Baltic Sea. Zajeci lies in the region of Moravia, and forms a new destination wihtin the ECL network.

The twice-weekly shuttle is named the Moravia Shuttle. Last weekend, the first train rolled out of the intermodal terminal in Travemünde, carrying trailers and containers. According to the subsidiary of the Lübecker Hafen Gesellschaft (LHG), this route was high in demand. Therefore, frequency will soon be doubled, with an expected 7,000 cargo containers lifted in the first twelve months. These are units that for the most part have been running over Poland so far, ECL commented.

DSV will load a considerable part of the units on the Moravia Shuttle. DSV added: “We are always looking for alternatives to reduce the impact on the environment, and this intermodal solution will help in the current market situation with high transport demand and limited capacity due to the lack of truck drivers,” says Christian Gerdtsson, Deputy Managing Director of DSV, which is part of DSV – Global Transport and Logistics.

ECL focusses on connecting the Baltic Sea ports of Germany to the hinterland. Zajeci is the easternmost destination so far. The intermodal specialist has also reactivated services of its Ruhr Shuttle this year, a popular connection between Duisburg and Lübeck. It now cooperates with Kombiverkehr on this route, offering eleven services a week.