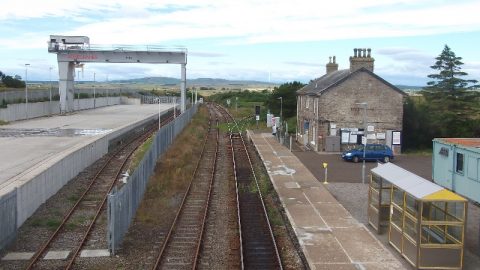 Supermarket Tesco is reportedly planning a test rail freight service using a Scottish intermodal hub built to carry decommissioned nuclear materials. If successful, it could kick-start the interest of other commercial operators in using the Caithness-Inverness line.

The 3.1 million Pounds railhead at Georgemas was opened in 2012 to accommodate nuclear loads from the Dounreay plant on Scotland’s north coast, to Sellafield in Cumbria, reports the John O’ Groat Journal.

Direct Rail Services (DRS) is a subsidiary of the UK’s Nuclear Decommissioning Authority, and was set up in 1995 to provide transport services to the nuclear authority. It has since diversified its portfolio significantly and has a number of commercial clients, including Tesco. DRS works with Stobart Rail to provide a rail distribution network across the UK from the supermarket’s Daventry depot.

The report says DRS’s Commercial Director Chris Connelly told a meeting of the Dunreay Stakeholder Group about the Tesco trial run being planned for next summer, and his hopes that the pilot would demonstrate it was practical to transfer the supermarket goods to the far north of Scotland by rail. Tesco’s rail service currently runs to Inverness before transferring to road to its stores in Wick and Thurso.

Nearly two years now, and nothing. DRS don’t have the will to start a regular intermodal service. The terminal was built for nuclear and that’s all they care about. With a fixed crane and very poor road access, even if we DO get a trial, it may prove the the economies of a service just aren’t worth it. To think, just a concrete pad and a reach-stacker would’ve had this up and running years ago 🙁 Instead, Tesco rail containers continue to travel the hundreds of miles by road. Climate Emergency?

Seconded Niall Laybourne’s comment. The A9 is crammed with haulers driving what’s essentially containerised loads up and down it. Lorries still have they’re place, but it’s definitely not driving for hours on end driving relatively straight lines beside a railway.