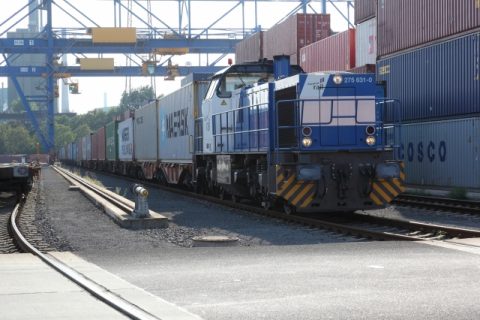 A big increase in rail traffic to and from China will help Germany’s Duisburg Port record a 12 per cent increase in containers handled – up to 3.7 million TEUs – by the end of 2017. Rail freight is continuing to increase significantly at the port, which has seen a decline in ship-to-ship turnover because of delays at Antwerp and Rotterdam ports.

The China-Europe trains in particular are playing a key role in this success, says the Duisburg Group. With 25 services a week between Duisburg and various destinations in China. containers carried by the China trains will increase by 50 per cent this year.

As in previous years, there have also been increases in the transport of mineral oil and chemicals, while coal continues to decline, mirroring the trend across Europe. Erich Staake, CEO of Duisport Group, said: “This trend will continue over the next few years due to the closure of older power plants in connection with the energy turnaround. Overall, we expect a slight increase in total cargo handling in 2017.”